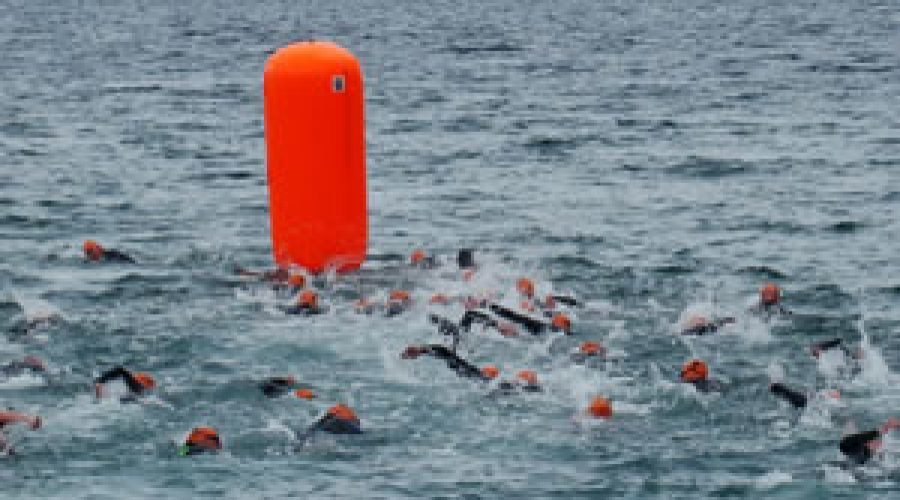 Field of 70 for Falmouth Aquathon Light showers and a slight on shore breeze did not deter over 70 competitors competing in the third annual Falmouth Aquathon at Gyllyngvase Beach in mid-June.

The event, organised by Cornish based Votwo Events & Adventure company, started with twenty taking part in the novice race of a 750 metre swim off Gyllyngvase beach and 5 km run to Pendennis Castle and back.

First out of the water was 22 year old Dan Lugg in 13 minutes 30 seconds and the first female, Becky Brooks of Mounts Bay Harriers, followed by Becky Reid who went on to win the race.

The run route around Pendennis Castle, with its steep hill half way round really shuffled up the pack, as Colin Snook, who was eighth out of the swim, powered passed everyone to take the win in 35 minutes 15 seconds.  Melissa Reid won the ladies race in 38 minutes 47 Seconds, just ahead of Becky Brooks and Lizze Bird.

Ben Mason, Votwo’s events director, commented: “Even though the afternoon started off with varied weather and sea conditions, competitors were registering right up until the start of the race. Having a novice race as part of this event works really well and encourages competitors, who don’t usually have the confidence to enter such an event, to take part.”

The main race competitors were greeted by better conditions and even a little sunshine as a good crowd gathered to watch fifty competitors complete the 1.5km swim and 10km run.

David Bartlett took an early lead from Alex Chklar from Bristol WGEL Club and Nathan Jolly from Cycle Logic. The field slowly spread out but the Falmouth Beach lifeguards were not called upon to rescue any exhausted competitors.

David Bartlett left the water in 18 minutes 8 seconds some 2 minutes 22 seconds in front of Alex Chklar. Jenny Rice from Okehampton led the ladies in 23 minutes 38 seconds just under 5 minutes in front of Sarah Domenery and Anne Maskell of Cycle Logic.

The two lap run changed the running order as local boy Matt Pullen of Cycle Logic powered past 10 competitors during the run to win in 56 minutes 19 seconds.  Jenny Rice kept up an unbeatable pace on the run to be first female in 1 hour 7 minutes 54 seconds from an improving Anne Maskell and Sam Westlake of Truro Running Club.  The top team was Tracey Davey and J Eatock in 1 hour 11 minutes and 12 seconds.

Matt Pullen commented: “It was a great race and really well organised, I really enjoyed it!”