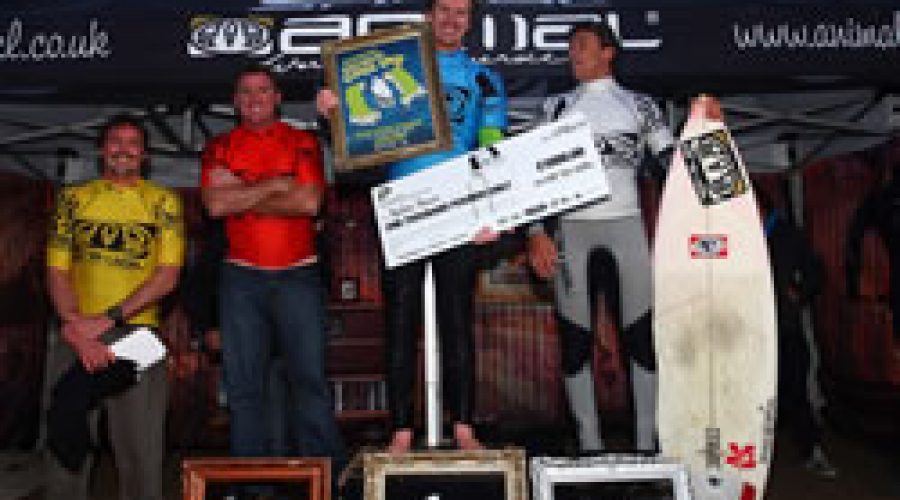 Reubin Pearce took home the Animal Newquay Open title, and with it cheque for £1000, in a tense final fought out between Spencer Hargreaves, Alan Stokes and Nathan Philips on Fistral Beach.

With high tide Fistral providing a chunky 6ft swell the solid conditions meant some high scoring waves from the competitors, keeping the judges on their toes, and the crowd on the edge of their seats to find out who would take home the Animal Newquay Open title.

Reubin made the comp his own with such a high score combination that his competitors couldn’t rival it with their top scoring rides. With the South African taking the top spot, second on the podium was Stokesy followed by Spencer Hargreaves and Welshman Nate Philips.

Spencer Hargreaves claimed the King of the Waves highest wave score of the event with a 9.5 to win a Sector 9 skateboard worth £200.  The Relentless Money Move went to Nate Phillips who gets to bank a sweet cheque for £250. This was also considered the Manoeuvre of the year by the panel of judges.

In the Women’s event the girls took on the 6ft swell and fought it out in the difficult conditions costing Nicole Morgan her board half way through the heat. Gabi Rowe took home first place with Zoe Sheath second, Sophie Helliyer third and Ireland’s Nicole Morgan in fourth.

With the sun setting over Fistral beach the final event of the UK Pro Surf Tour ended another great year of competitive performances from the cream of the UK’s surfers.

Dave Reed of UK Surf Promotions said, “This has been an incredible finale to great year. We have seen good waves at all venues of the tour and the performance of the competitors has been outstanding. Of the back of this event I believe British surfing will take another step forward”.

Steve Kitchin, Animal Sponsorship manager said, ‘It was great to support the final leg of the tour and see so much British talent on form over the weekend.’

The Under 16 boys was completed on the Saturday with the final bringing together Newquay home boy Leon Mansfield,  Tom Good, Beau Bromham and Animal’s Zak Lawton who entered the final with the highest heat score of the day.  16 yr old Leon Mansfield showed his class taking the victory and with it the 2009 overall championship title.