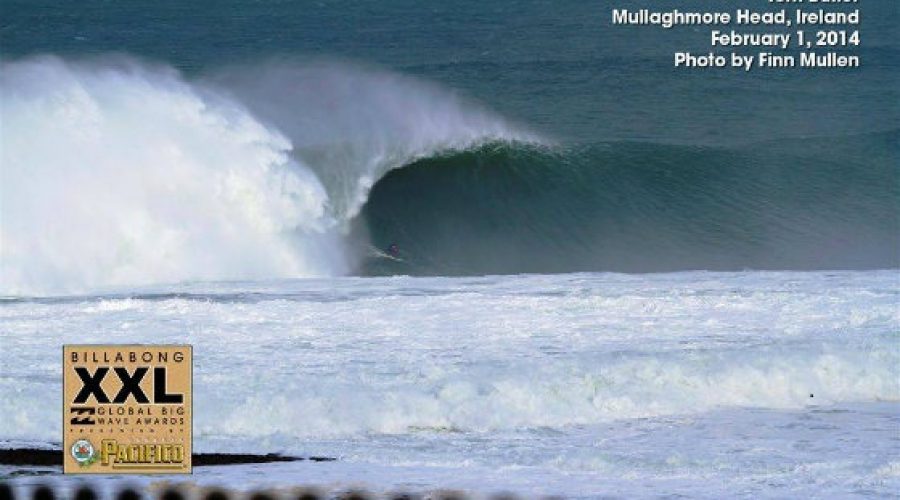 The Newquay surfer rode the wave of the day at the notorious Irish big wave spot during the monster storm swells which battered the Atlantic coast in early February.

A stoked Tom Butler wrote on his Facebook timeline on 01 Februray, “just rode the biggest wave I ever have @ Mullaghmore”.

For someone who dedicates his life to charging big waves, this means it must have been very big indeed. It’s difficult to say just how big the wave was – we’ll leave that for the Billabong XXL judges – but it was many times overhead and a powerful monster of thick barrelling water.

It has been an awesome winter for swell in Cornwall and right across Europe, with a seemingly endless barrage of huge waves lighting up the big wave spots.

Ireland’s Mullaghmore Head has entered the surfing consciousness in recent years as one of Europe’s premier big-wave breaks, some considering it to be the Northern Hemisphere’s equivalent of Tahiti’s Teahupoo, known as the world’s most deadly and perfect wave.

A few days a year the break goes super-sized as storm swells push mountainous waves across the deep bay onto a shallow reef, producing some seriously heavy waves only tackled by the worl’ds best big wave surfers.

Among the regulars at this big wave spot is Tom Butler who scored what is considered to be the wave of the season at Mullaghmore Head.

On his adrenaline-pumping ride, Tom commented: “It was a gigantic barrel, and I was standing in the jaws of it. I ended riding over the lumps of the three different ledge-y parts of the reef and came out. The boys were screaming. I sensed then that it might have been a pretty special wave.”

Congratulations to Tom on his Billabong XXL nomination.