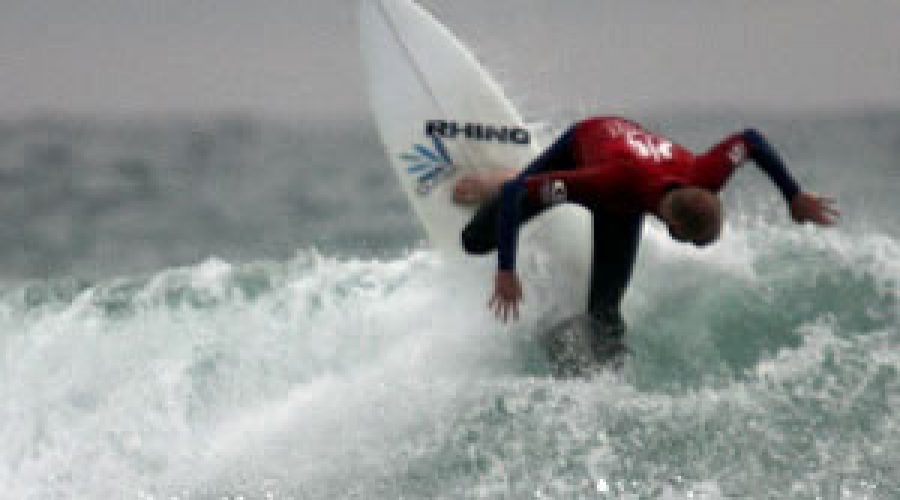 Cornwall based surfer Johnny Fryer was the man of the match at the English Surfing Championships with an impressive win at Watergate Bay in June.
The local surfer made the most of small, dwindling swell to take the Men’s Open title in the event that had already been postponed on three previous occasions because lack of swell.
Because of the conditions, contest directors decided to complete the whole of the Mens and Ladies Open contests in just one day. This meant that each of the competitors who made the finals would have surfed four competitive heats in one day. This was not only a test of skill and prowess but fitness and stamina would be a deciding factor too.
With 2 -3ft surf rolling through Watergate Bay all day the finals got started in the early evening, Hannah Harding maintained her authority through the heat to take the Ladies English title, the battle for second was awarded to 14 year old Peony Knight, Gabi Rowe taking third and Rachael Taylor coming 4th. The Men’s Final was an array of progressive surfing from all four surfers, each posting impressive scores, but it was the the consistency of goofy footed Johnny Fryer who attacked on his backhand bagging his English National title.
The second day of competition generated much smaller conditions, The longboard semi finals took advantage of the clean 1.5ft waves but the organisers luck was beginning to run out. The Southerly wind began to veer to the North and with it the came worse surfing conditions. With no other option than to complete the competition, all five finals of the scheduled finals were held in abysmal 1ft onshore surf. This though, to the surfers in the Senior, Masters and Veteran categories meant they changed their boards to suit the conditions with most opting for super buoyant fish boards and working hard at generating any speed they could muster to get those vital manoeuvers completed.
Emillie Currie won her first English title in the Ladies Longboard. The Mens Longboard was won by Ben Howarth whose hard work and combination of nose riding and driving down the line in such poor conditions gave him his first English title too.
The English Surfing Federation is a volunteer organisation and would like to acknowledge the support of Extreme Acadmey, Sharps Brewery, Snugg Wetsuits, Zumbatastic Newquay, Mindless Longboards, Bagabond, SurfingGB, Cornwall College Surf Science Faculty and UK Pro Surf Tour.
* Photos Lauren Stott and Matt Knight
Results
Mens Open; 1. Johnny Fryer 2. Sam Lamiroy 3. Richie Mullins 4. Gordon Fontaine
Ladies Open; 1. Hannah Harding 2. Peony Knight 3. Gabi Rowe 4. Rachael Taylor
Mens Longboard; 1. Ben Howarth 2. Ben Skinner 3. Adam Griffiths 4. Angus Murray
Ladies Longboard; 1. Emillie Currie 2. Ashleigh Bennetts 3. Nicola Bunt 4. Rebecca Stanhope
Senior; 1. Lee Bartlett 2. Felix Dixon 2. Richie Mullins 4. Gareth Llewellyn
Masters; 1. Martin Connelly 2. Lee Bartlett 3. Chris Harris 4. Paul Barrington
Veterans; 1. Tony Good 2. Andy Sturt 3. Roger Knight 4. Matt Knight 5. Anthony Weight