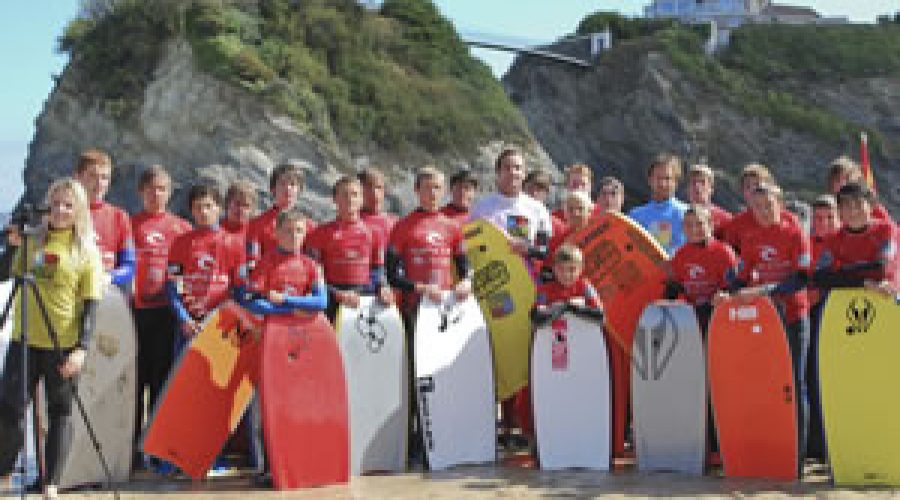 With the sun blazing overhead and fun 1-2ft waves breaking at Towan beach junior bodyboarders from around the country took part in a free coaching session and competition in Newquay in Augsut. The Grommet Challenge is the initiative of British Team Coach and Senior Bodyboarding Champion Rob Barber who in response to last year’s disappointing turnout in the junior divisions at the Auto Sleepers National Bodyboarding Championships took it upon himself to put a shot in the arm of junior UK bodyboarding.

“Bodyboarding has been going from strength to strength in recent years however if we don’t look after the grassroots and keep the new blood coming through, then the longevity of the sport is endangered.” said Rob. “Hence, we put together the Grommet Challenge to give young bodyboarders who may not otherwise be able to afford coaching and contest entry, an opportunity to come along and receive some free instruction, participate in a fun and informative competition environment and win some great prizes. Hopefully we will give them the confidence and inspiration to carry on in the sport.”

A total of 24 young bodyboarders, some as young as nine and from as far away as Leicester attended the day and were treated to tuition from the elite coaching team at Rob Barber’s Bodyboarding School. The coaches included Rob Barber, English Junior Team Coach and former National Champion Aidan Salmon and former Western Australian Champion Lauren Williams.

During the morning session all the riders were taken through manoeuvre specific drills to fine tune the riding of the more experienced bodyboarders, and begin to develop the more novice members of the group. The three hour session also included video analysis and advice on how to warm up and prepare equipment for a productive session.

As stated by English Junior Team coach Aidan Salmon: “It doesn’t matter what stage you are at with your riding you can always improve your bodyboarding. It was great to be able show the grommets how they can adapt their free riding to competition style bodyboarding. These guys have got some real talent to be developed and I hope after today they stick with it.”

After a short lunch break and tutorial by Salmon regarding competition rules and strategy the group descended on South Fistral for an afternoon of competition. The group was separated into three age groups; under 18, under 16 and under 14 with each division being closely contested in the challenging 3-4ft surf.

The stand out performance of the event went to an Under 16 competitor from Porthtowan, Sam Brabyn. Brabyn smashed the Under 16 final with a combined point score of 19.50 out of a possible 20 points. Brabyn won himself not only a new NMD board generously donated by Action Sports Distribution, but also a sponsorship from bodyboarding’s newest and most progressive retailer the Bodyboard-Depot.

Brabyn elated with his win commented: “I had such a good day it was great to be able to put into practise everything from this mornings’ session into this afternoons competition, and then to come away with the win was epic. I can’t wait to come back. I would really like to thank my sponsor Science Bodyboards and also the Bodyboard-Depot for all their support.”

Closely following Brabyn in the Under 16 division was Newquay local Joe Woodhouse followed by Olly Nicholson and Henry Forsyth.

The Under 14 division was won by first time competitor James Trevena who received a new board donated by event sponsor Alder Sportswear. Trevena was closely followed by Tyler Littlejohns, Alex Brown and Sunny Morse who finished second, third and fourth respectively.

The Under 18 division was taken out by Edward Hone of Plymouth who managed to beat Owen Sparks.

The Grommet Challenge organisers would like to take this opportunity to thank the event sponsors Newquay Activity Centre, Rob Barber’s Bodyboarding School, The Bodyboard- Depot, ThreeSixty Magazine, British Bodyboard Club, Alder Sportswear and Action Sports Distribution whom without this event would not have been possible.