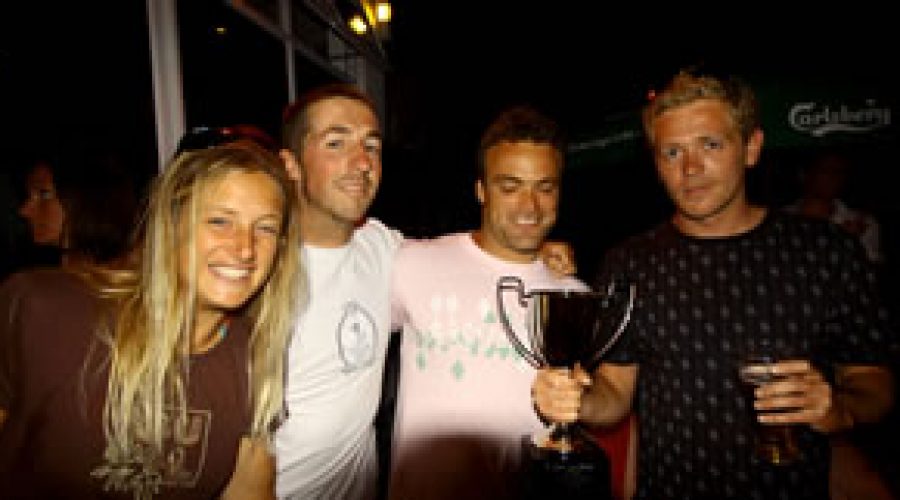 The first English Surfing Federation Inter-company Surf Battle hit Fistral Beach on one of the most sizzling days of the summer yesterday and an array of the country’s hottest surf talent turned out to do their bit to help support the English Junior Team 2008.

A triumphant tag team from surf brand Gul emerged victorious and over £3,000 was raised from the day to go towards the required £10,000 to send to team to the European Championships in Morocco this coming November.

In the early rounds, the contest was extremely relaxed with a really fun vibe however as the teams made their way into the semis and final, the competitive spirits appeared and the bar was raised.  A number of standout performances from Russell Winter, Mark ‘Egor’ Harris, Mike Young and Krisha Sowinski kept competitors and spectators gripped until the final horn.  However Russ Winter’s double whammy 9.5 and Egor’s 7.5 ensured that Gul took the first ever ESF Inter-company title with Escape Surf School coming second, the British Surfing Association team in third place and North Shore Surf Shop taking fourth.

Following the contest hundreds of members of the surf community made their way to the new home of the Rip Curl ESF Surf School, the Carnmarth Hotel, where a BBQ and top DJs kept everyone going before Bradley Start opened up the ESF Junior Surf Team Fund Auction.

Rob Barber of the ESF Surf School said: “Similar team fundraisers and inter-industry contests have regularly taken place in Australia and America but this was the first time that this type of competition has happened here and it was a massive success.  It was such a brilliant day for it all and it was amazing to see a whole host of the country’s top surfers out in force and in the waves and the competition really got everyone going.”