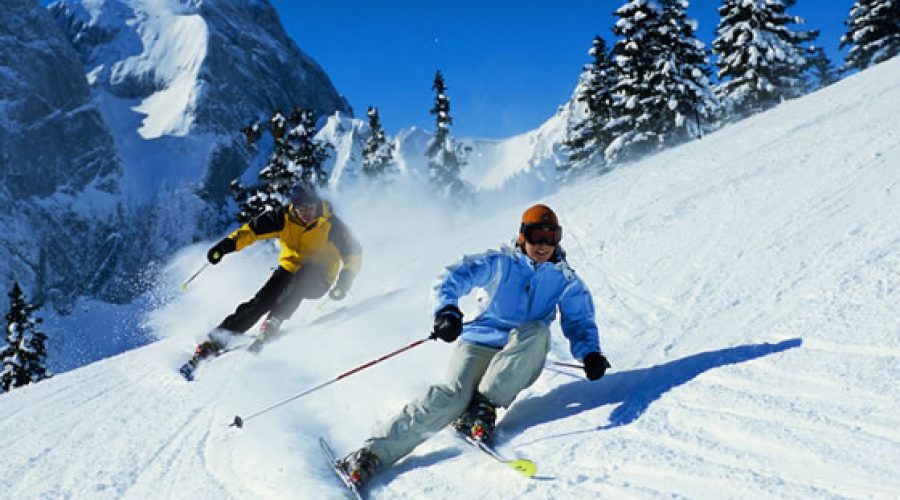 We celebrate the launch of a direct flight to the Alps with a guide to some of the best ski resorts close to Geneva. At long last, an airline has come to the rescue of Cornwall’s skiers and snowboarders and provided a much-needed air link with the slopes. Flybe’s flight from Newquay to Geneva is a ‘lifeline’ for snow sports addicts looking for a wintry fix in the Alps. Instead of travelling to Exeter, Bristol or London, winter sports fans can now travel direct from the coast to the mountains hassle free.

But with so many fantastic Alpine ski resorts, where do you go when you get to the other end? To help you on your way, we’ve come up with a guide to some of the top ski resorts within easy reach of Geneva. We’ve tried to select resorts with something for everyone from nursery slope novices to seasoned powder hounds and snow park extremists.

Avoriaz
Avoriaz has styled itself as a paradise for snowboarders and freestyle skiers. Although not as high or challenging as some destinations on this list, the French resort is at the cutting edge of progressive snow sports. As well as dedicated freeski runs, Avoriaz boasts Europe’s first ‘ecological’ snowpark called The Stash. This is a series of runs down ungroomed forest ‘trails’ punctuated with ‘natural’ obstacles such as wooden slide rails and tree trunk bridges. And as if this wasn’t enough, you can also criss-cross the Swiss border from Avoriaz to other resorts in the Portes du Soleil ski area.

Meribel
Meribel is a perennial favourite with scores of surfers from Cornwall who travel from the beach to the mountains to work the ‘season’ each year. To say Meribel is lively is an understatement. The premier French resort rocks. But it’s not all about the nightlife. As part of the Trois Vallees – the world’s largest ski area – the skiing and snowboarding is phenomenal.

Verbier
Home to the Verbier Ride freestyle ski contest and the Nissan O‘Neill Xtreme Verbier freeride event, Verbier has something of a reputation for extreme skiing and snowboarding. Yes, the Swiss resort does have steep, near vertical descents, deep powder fields and one of the best snow parks in the Alps, but it also has winding, pisted ‘motorways’ and gentle nursery slopes. The resort is also renowned for its exclusive nightlife and has one of the most exclusive après ski scenes around.

Chamonix
As one of longest established and well known Alpine resorts, Chamonix is a natural choice for skiers and boarders jetting into Geneva. The Chamonix valley is a vast ski area sitting is the shadow of Mont Blanc – Europe’s highest mountain. There’s something for everyone here. Brévent offers great panoramic views and a variety of runs. Argentière has a new snow park to keep freeriders happy. Then there’s off-piste adventures on the Vallee Blanche for more serious snow junkies.

La Clusaz
It may be the closest resort on our list to Geneva, but La Clusaz is not lacking in high mountain charm. This self-contained resort is centrally positioned below a series of high peaks flanked by slopes of varying degrees of difficulty. Although skiing may be a bit limited for more hardcore riders, this is more than made up for by a well maintained snowpark and boarder-cross trail.

Courmayeur
Courmayeur occupies an enviable position on the Italian side of the Mont Blanc Massif. Just over the border from Chamonix, Courmayeur is a traditional resort which hosts many world-class ski events. Skiers and snowboarders are attracted by the challenging black and red runs, and the superb off-piste in the Mont Blanc valley.

Gstaad
Glacier topped Gstaad offers one of the longest seasons in Swiss Alps. It is possible to ski the 3,000-metre high glacier from October until the beginning of May – long before and after the snow has settled on the lower slopes. The resort boasts 250 kilometres of pistes, plus snowboard parks, across six independent ski areas. Back in the village, the traditional style chalets and hotels have been complemented by trendy bars and clubs making for lively après-ski.

Val d’Isère
Val d’Isère is a little further from Geneva, but warrants inclusion because of its world class status. Part of the Espace Killy, together with neighbouring Tignes (http://www.tignes.net), the resort has access to some of the highest ski fields in the Alps. The highest lift at 3,450m gives access to severe black runs and off-piste skiing, with gentler runs and a snow park way below. But bear in mind; this resort is seriously posh. How posh? Transplant Rock in Cornwall to the mountains and that will give you some idea.

Information
Flybe fly from Newquay Cornwall Airport to Geneva every Saturday throughout the winter. Flights to Chambery, which is even closer to the slopes, start next winter courtesy of Air Southwest.