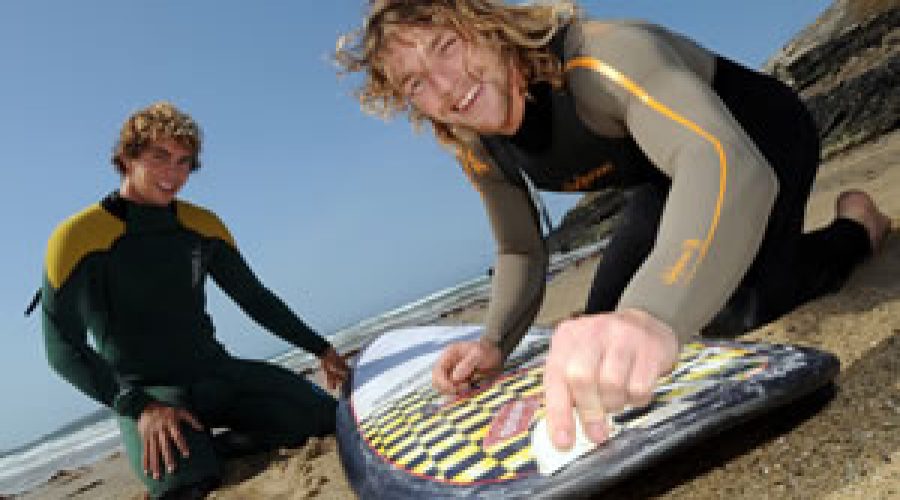 Skindog Takes on the World Newquay surfing stars Ben Skinner and Adam Griffiths are bidding for world glory this month (May 2008), boosted by powerful recent performances with new boards designed and produced in Cornwall.

Ben, 23 and Adam, 20, are the only British competitors to qualify for the Oxbow World Longboard Tour, starting with a nine-day event at Anglet in South West France (May 5-13) and finishing in California in the autumn.

They are France-bound in the wake of a great showing in the recent British Longboard Union Tour first event at Perranporth, which Ben won against all the top British longboarders in his bid to claim the championship for the fourth successive year.

And it was the first big competitive outing for the new Skindog surfboards from Newquay-based Adams Surfboards Ltd, the company launched just four months ago by Ben (designer), Matt Adams (shaper) and Jason Gray (glasser).

The company is sponsoring Adam, who finished third at Perranporth, and James Parry, of Sennen, who came fifth and has been unlucky not to qualify for the world tour.  Ben, Adam and James all finished in Europe’s top six last year.

“We are all absolutely loving these new boards,” says Ben. “The Perranporth result was a great start to the year.  We have worked very hard with new shapes and new technology and for all three of us they are the best boards we have ever had – they are just flying!”

Last year Ben became European longboard champion and in 2006 he won a silver medal in the World Surfing Games – the equivalent of the Olympics – in California. At Perranporth last month (April), he won every heat and then took the final in style.

He and Adam will set off from Plymouth to Roscoff on 1 May on board the Pont Aven, which is owned by Brittany Ferries, a sponsor of the British Surfing Association.

“I am not settling for just taking part in the world tour,” says Ben. “I am going there with the clear intention of becoming world champion. If I can maintain my consistency throughout the tour, then I am very confident that I will succeed in that ambition.

“I am feeling pretty good after resuming successfully on the British tour and I’ve been working very hard with my personal trainer, Lee Stanbury, who has a 20-year track record of training, including the national swimming team, and is currently writing a book, to be called ‘A Surfer’s Guide To Fitness.’”

Ben adds: “I am absolutely delighted that Adam will be joining me.  We are good friends and have been surfing against each other for a long time.

“He finished third in Europe last year and it was his 20th birthday just before the Perranporth success, so that made it doubly sweet for him.”

Ben qualified for this year’s Oxbow World Longboard Tour by finishing 17th in last year’s equivalent. Adam was given a “wild card” entry after finishing in Europe’s top three.

* For surf schools and surfing lessons see our page on surfing in Cornwall.