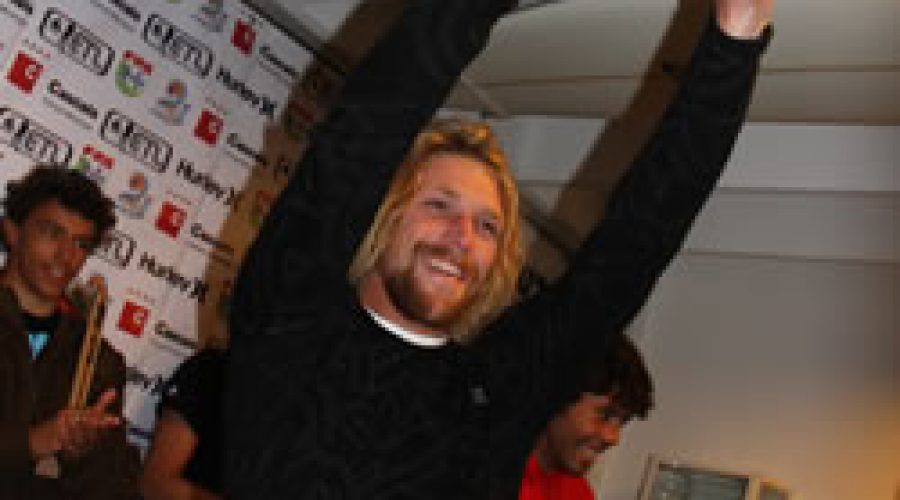 Cornwall’s surfing superstar, Ben Skinner has conquered Europe with a hat-trick of European titles to round off a dream year.

In his latest triumph, he beat the current world champion again to reclaim the ESF European Longboard championship which he won in the event’s first year in 2007.

This came in the wake of his two other big successes this year – the Eurosurf Championship in Jersey, when he was a member of the Channel Islands team, and his men’s final success in the ASP European Longboard event at Tapia de Casariego in Spain.

Perranporth-based Ben, 24, sealed his “hat-trick” with an outstanding performance in the fourth and final leg of the ESF European Longboard Tour at Estoril, Portugal.

He finished the tour with total points of 5,768, comfortably ahead of current world champion Antoine Delpero, who came third with 4,046, and his brother Eduard Delpero, second with 4,318.

In classic conditions, Ben once again achieved world-class scores before judges who will also be involved in the world events.  He knocked out Antoine Delpero in the quarter final and then took an unassailable lead in the overall event when beating Eduard in the semi final.  Ben scored a nine and an eight in the semi (to add to a nine in an earlier heat) and totalled 17.25 semi final points against Eduard’s 15.  With the pressure off, and by now understandably tired, Ben cruised to a final heat win over another Frenchman, Alexis Deniel, with heat totals of 14.6 and 13.93.

“The semi-final was massive and I gave it absolutely everything, with the 17.25 being my biggest score in the whole event,” reflected Ben.  “It was a man-to-man heat against Eduard and I was determined not to let it slip.  I just put my head down and  tried to control the controllables, focusing on my own performance and forgetting about anything else. It all came down to the last event in Estoril and the conditions were once again amazing.  The waves were quite scary.  There were a lot of rocks around, and not everyone was very confident of hitting the edge and making the big drops, but I just decided to get on with it!”

He added:  “I’m absolutely over the moon, but also a little tired!  I’ve travelled two and a half thousand miles over the last three weeks to complete this tour and it’s all been pretty tense.”

Ben’s super 2009, in which he has scarcely put a foot wrong, reinforces his conviction that he can eventually achieve his lifelong ambition to become world champion.  Earlier this year, he gained bronze in the Billabong ISA World Surfing Games in Costa Rica.

And Estoril was confirmation of Ben’s great return to form this year, having finished a disappointing third in last year’s tour after injury, and it was another boost for his Skindog board, made by the namesake company at St Columb Major in which he has a stake.

It was the third year in a row that Ben had won the Estoril leg of the European Longboard Tour.

And it followed another outstanding performance a month earlier in the Maldives leg of the ASP World Longboard Tour, where he beat defending ASP champion Bonga Perkins in the first round.  Although he came unstuck in the next round, it was enough to secure Ben tenth place in the ASP overall world rankings.