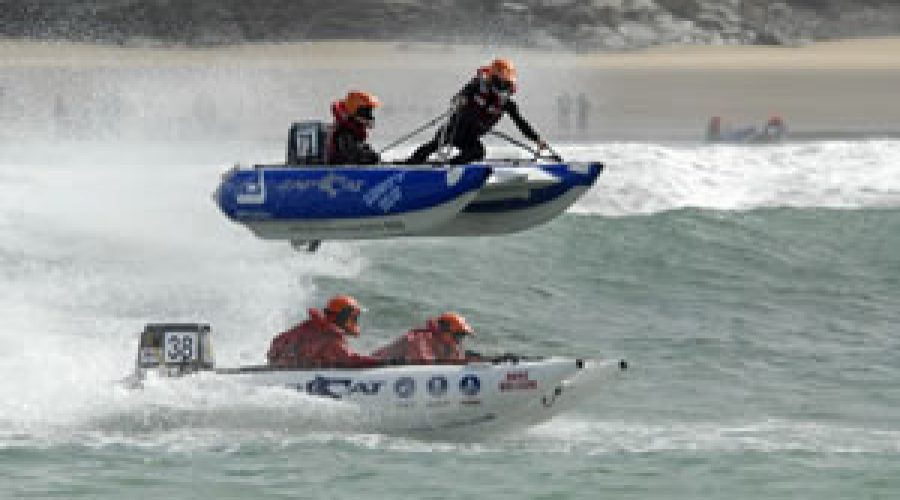 Zapcats will once again entertain spectators as they thrash through the waves at Watergate Bay in the final two rounds of the National Zapcat Championships.

The powerful inflatable catamarans will be tearing through the surf again on Friday 12 and Saturday 13 October as the prestigious race series is completed at the Extreme Academy.

Crews will be racing to decide the champions in the King of the Surf Tournament – a stand-alone race series held exclusively in the waves of one of the country’s best surfing beaches. Points will also contribute to the final standings in the National Zapcat Championships.

“We are really looking forward to welcoming the Zapcats back to Watergate Bay for a second weekend of racing this autumn,” said Will Ashworth, Managing Director of The Hotel & Extreme Academy, Watergate Bay.

“The first two rounds we held in September reaffirmed why the crews love coming here; we had fantastic racing conditions which offered the competitors a real challenge, with a powerful swell and strong offshore winds making for some really exciting racing.”

Southampton crew ‘Pegasus Vortex Racing’ sealed their status as 2007 National Zapcat Champions at the previous weekend of racing at Watergate Bay, winning both rounds on 22nd and 23rd September and taking the lead in the King of the Surf Tournament.

There is still plenty at stake for the other crews however. With two more rounds of the King of the Surf Tournament to go, it is possible that any of the crews could wake up with the trophy on Sunday morning.

South West crew ‘Go Commando’, piloted by Richie Lake from Torpoint in Cornwall, are well-placed to push for the King of the Surf title; their second place on Saturday helping them to equal third on the rankings.

The four crews in joint-second and joint-third place are only separated by five points, and with 100 points available for the winner of each round the racing really is wide open.

As always, the safety of participants, spectators and the public is of the highest importance at Watergate Bay. Racing will be confined to the southern end of the beach and a 50 metre buffer zone between the race area and the general public will be strictly enforced.

The patrolled swimming area will also be closed during practice and racing hours (11 am to 5pm) on both days and surfers will still be able to enjoy the peaks towards the north end of the beach.