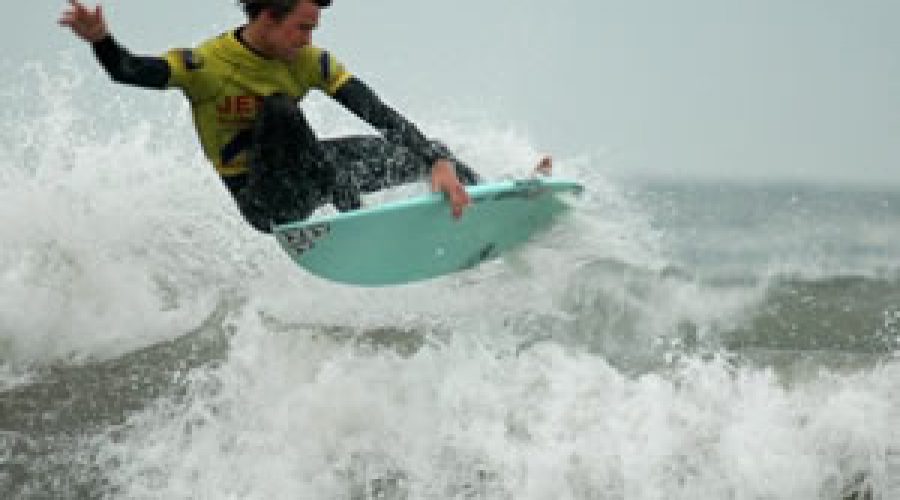 Joss Ash from Bude defended his title with a close win over his brother at the 16th ‘Jesus Surf Classic’ at Croyde Bay on the weekend of 13 and 14 September.

Competitors enjoyed near perfect conditions with light winds and a solid 4ft swell, in bright and sunny conditions for the long running and very successful event organised by Christian Surfers UK.

The ‘Jesus’ due to its increasing popularity was split again this year between the traditional event at Croyde, and the Jesus Longboard Classic to be held at Polzeath over the weekend of 19 and 20 October. With entries restricted to 140 contestants the event filled up very quickly, especially as the surf forecast improved as the week running up to the event went on.

Conditions for the seven categories started off on Saturday morning with a slight off shore wind and sets of around 2ft. With two peaks running throughout the day, progress was swift, and by the end of the first day all categories were run to the semi final stage.

Sunday dawned with very light winds and an increasing groundswell, especially on the incoming tide, which saw some outstanding surfing in all the age categories, as Croyde offered up some low tide, classic conditions.

The Youth event (Under 14) had the highest number of entrants so far with 32 entered, which is a great pointer to the health of the future of British Surfing. The final was between  three Cornish based surfers, and a travelling competitor from Bournemouth.  In a tight final Miles Lee-Hargeaves from Bournemouth took the title ahead of Bude’s Jobe Hariss, and Newquay surfers Harry Timson and Sam Harwood.

In the Junior Women’s division (Under 18) there was a new name on the trophy with Sophie Sainsbury from Port Isaac winning ahead of Tassy Swallow, Gabbi Rowe and Croyde’s Karma Worthington.

osh Daniel from Hayle was 4th in the cadets (U16), just beaten by Newquay’s Tom Good, but the division was won by Croyde local Alex Baker , ahead of Toby Donachie, who was surfing in three events all weekend.

In the Men’s Junior (U18 ) final Stuart Campbell surfed really well to hold off Toby Donachie in 2nd, Jack Whitefield in 3rd and Marcus Lascelles in 4th.

The women’s final saw Beth Mason improve on her 2nd place last year, by winning, with some great power surfing. She was pushed all the way by Sophie Hellyer in 2nd, Tassy Swallow in 3rd and Karma Worthington.

The Masters final (Over 35’s) saw some new names in the final with some great surfing throughout, this year saw Bude surf Paul Barlow taking victory, ahead of Mike Plackett, Steve Harvey (Just back from France the day before) and South Wales Rob Poutney.

The final event of the day was an amazing final between four  top class surfers in the Open Final. Travelling New Zealand surfer Luke Hughes did well to reach the final, but ended up 4th behind Lyndon Wake, in his first Jesus Surf Classic final. Top two places went to the Ash brothers with Reubyn peaking in the semi final which saw a near perfect wave by him where he pulled an insane aerial 360, then followed it up with 4 big turns. He just failed to defeat Joss, who retained his 2007 title and his £250 cheque with a mixture of power surfing and aerials throughout the heats.

ith over 100 Christian Surfers volunteers supporting the event there were lots going on throughout, and the marquee area was the venue for the presentation on late Sunday afternoon. Joss thanked the organisers for putting on ‘another great event’ and Phil Williams, Contest Director, thanked God for an amazing weekend of waves, sunshine and a great atmosphere between all the competitors and helpers.

Just after everything had been dismantled the heavens opened and it rained for 8 hours, what great timing!