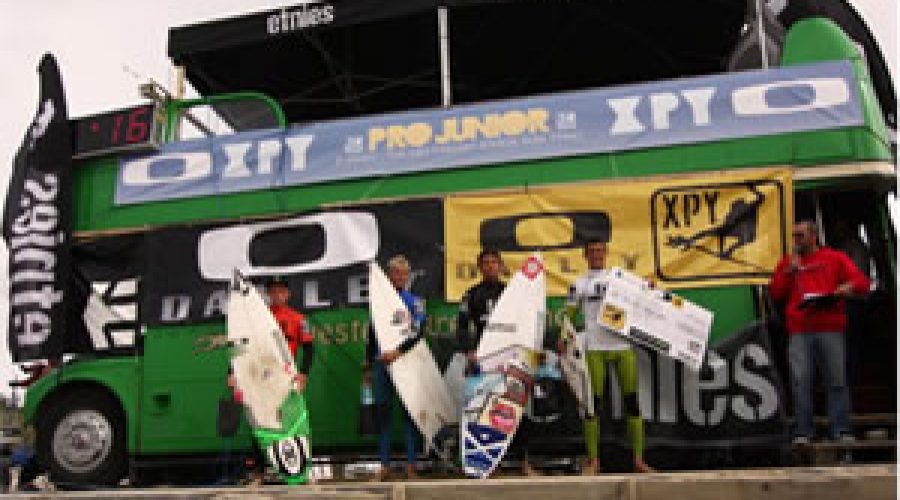 Last weekend, Fistral beach came alive with some of the best Junior surfing seen in recent years at the Oakley XPY Pro Junior Surf Comp, a sure sign that the future of British surfing is in good hands!

With good weather, fun 2-3ft waves all weekend, the perfect platform was set for all surfers to perform!

The 2010 Judging Panel consisted of 2 ASP circuit judges, along with the elite surf judges within the UK. Located on top of the Western Greyhound open top bus, the judges had a textbook view of the competitors!

This year’s £3,250 prize purse (the biggest ever for a junior event in the UK) along with the event rated 3 stars on the UK Pro surf tour, surfers were eager to succeed and gain crucial points.

With the tide high for the finals, North Fistral turned into a natural amphitheatre for spectators and families all along the waters edge.

First final to hit the water was the under 12’s. An explosive display from all 4 finalists, a true indication that British surfing is heading in the right direction! Harry de Roth took home the gold along with a £100 prize cheque!

Next up was the under 16’s girls. The finals showed a step in the right direction was Tassy Swallow shining and walking away with £200 pounds in her back pocket.

The Under 16’s boys was theatrical, with Jobe Harriss leading throughout the heat, but with a double interference called in the dying seconds of the final between him and Harry Timson, Paddy Daniels took the victory and the £200.

The entertainment started from the buzzer in the Pro Junior Final, with all surfers locking in their first rides within the first minute, but Alex Baker edging all his rivals in each exchange, leaving Lewis Clinton in 2nd chasing a near perfect 10 point ride and Arron Evans (3rd) & Sam Scoble (4th) needing a combination of high scoring waves. Alex Baker walked home with the prize cheque of £1000, the first junior surfer to walk away with that sum of money!

The prestigious ‘XPY Highest Scoring Wave Trophy’ went to Jobe Harriss, locking in the highest scoring with of the weekend, an 8.5 across all the judges scoring sheets. Jobe walked away with a pair of Etnies shoes.

And finally Matt Adams surfboards donated a brand new 5”9 surfboard to Sam Scoble for most improved surfer of the event respectively.