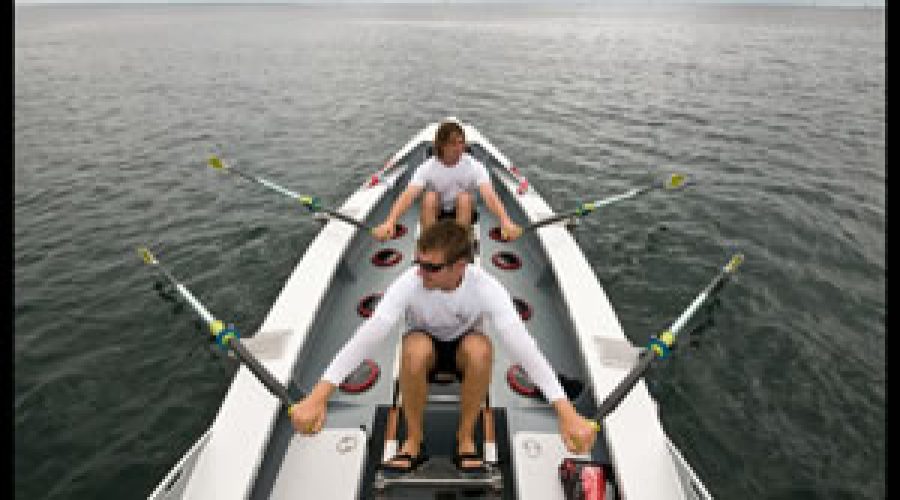 Meet the man who took on the Atlantic in a rowboat Cornishmen Phil Pring and his friend Ben Cummings longed to experience the mid-Atlantic in a tiny vessel. They entered the Atlantic Rowing race from the Canaries to the West Indies to fulfil this dream but after two years of planning, 76 days at sea and rowing nearly 3,000 miles the dream became a nightmare.

Phil Pring will be reliving the highs and lows of this epic journey on Wednesday 24 November at 6.30pm at National Maritime Museum Cornwall.

Sighting land, and just a mile from the finish, knowing that they soon would be able to release themselves from their 6ft by 24ft boated prison and set foot on land, a rogue wave forced them onto a reef, capsizing the pair and dashing their hopes.

Phil says: “The force of the wave that capsized us was incredible, from that moment on all thoughts of a race position were forgotten as we fought to stay with our upturned vessel. The hour that followed was horrendous, while being battered by waves and dragged over the reef in the pitch black, we did all that we could to survive the situation before being rescued by the local coastguard.”

“We’d been through a lot of tough times together – enduring weeks of isolation, sleep deprivation, dehydration, heavy seas, weight loss and the very real danger of being crushed by supertankers, but this was by far the most terrifying.”

Soon after, we were given the good news that we had achieved a transatlantic crossing as we had passed the eastern tip of Antigua (the landmark used for the event) and were able to celebrate with family and friends. Through the following press coverage we raised the awareness of the Cornwall Blind Association – our designated charity – so at the end of the day we achieved our goals, but not as we had planned!”

If you have an ambition and need the motivation to achieve it then this talk is for you. You will not only admire but sympathise with Phil’s journey and, if you arrive a little early for the lecture, you can also see the ‘shipwrecked’ boat.

Meet the adventurer and his boat at this fascinating illustrated talk at the Maritime Museum at 6.30pm on 24 November. Tickets are £8 for lecture only or £18 including a two course buffet. Book your ticket on 01326 214546.