Rock climbers flock to Cornwall to experience sea cliff climbing. We sent our adventurer to Sennen to see what all the fuss is about. The rock glowed red in the late afternoon sun as the deep blue sea pounded the granite beneath me. I clung on to the sheer rock face, short of breath thanks to ample doses of adrenaline, exertion and fear. I was over fifty feet up, trying not to think about the hard slab of rock way below. Contemplating the next big move, I couldn’t go up or down. I just froze.

Although I’d climbed before, I wasn’t quite prepared for the feeling of complete exposure induced by this awesome setting. I was perched on a ledge, high on a sea cliff at Sennen. I’d come here to try out climbing first-hand but I had no idea just how extreme the experience would be.

When my climbing guides Matt and Simon from Cornish Rock Tors suggested Sennen, I wasn’t too enthusiastic about the long drive to the tip of Cornwall. But it was well worth the effort. This laid-back fishing village is a short hop from Land’s End and has some of the country’s best coastal climbing right on its doorstep.

Rock Paradise
In the late autumn sunshine, protected from the south easterly wind we were spoilt with perfect conditions. It felt more like California or Spain. In fact, fair weather climbers in Sennen often compare the conditions to the Mediterranean.

The main crag is accessible for all levels of climbers. At low tide it is a short walk around the base of the cliff. We arrived at high tide and accessed the rock wall by clambering down a gully from the top. The set up is incredible. At the base of the mighty sea cliffs, we were surrounded by an amphitheatre of towering granite potted with cracks, corners and boulders, which make it a rock climbing paradise.

Simon summed up the attraction. “Sennen has a broad range of climbs throughout the grades, with everything from balancey slab-climbing to butch overhangs and jamming cracks to pit yourself against. The rock is solid and clean granite, meaning you can trust every hold. It is incredibly beautiful and gives you a real taste of what sea cliff climbing is all about.”

Making the Grade
Every lump, bump and crack at Sennen has been mapped out by previous generations of climbers. Often with elaborate names, these routes have been given grades which are undecipherable to non-climbers. Only hardened climbers seem to know what it all means.

Matt is one of those climbers. “The traditional grades run from Moderate to Hard Very Severe, which was originally the toughest grade possible,” he said. “But the skill and agility of climbers and the quality of rock boots improved so much that they had to introduce a new set of grades known as Extreme Severe.”

There was no danger of me tackling any of the E numbers – at least not on this day. Instead, I started on a Severe route known as Corner Crack. It sounds impressive but this really was one of the more basic routes at Sennen. As a relative beginner, I climbed using a top rope technique with Simon belaying from the bottom. This meant that if I did slip, I would not fall far. But this little bit of knowledge did not help to calm my nerves as I set off up the cliff.

Wall Crawling
But after a few moves I began to gain confidence. My experience of climbing indoor walls had prepared me well. I found the foot and rock holds relatively easily, and used the rock over technique to use weight transference to move from point to point up the wall.

Washed clean by the Atlantic waves, the rock at Sennen is smooth but super grippy and marked with ridges, cracks and grooves. The dependability of the rock boosted my confidence and I quickly ascended to the top of the cliff. I only lost my nerve a bit when asked to trust the kit, lean out backwards and abseil down.

A good guide will always want to make a climbing session fun and exciting by choosing a challenging route for your ability. Simon saw how I had handled the last climb, so moved me up to the Civvy Route. This is a Hard Severe route with a scary looking overhanging boulder near the top. I made quick progress, trying to find my own way up the vertical wall. When I hesitated, Simon would call out commands guiding me to the next good hold.

Frozen in Space
It was only when I almost reached the top that I came unstuck. I’d made it to the safety of a ridge just below the overhanging boulder. I tried to get myself into a position to attempt the manoeuvre that would take me up and over the boulder but I couldn’t summon the bravery to make the move. I was stuck.

Simon shouted some words of encouragement. “Trust yourself. There are some good hand-holds on top of the boulder. You’ve just got to push up from your feet and reach over. Don’t worry about falling. You won’t go anywhere, the rope will hold you.”

That was easy for him to say with his feet firmly on flat ground and years of climbing experience under his belt. This really was a first for me, making this kind of move at this height. It was a test of nerve and I was unsure I had the balls to do it. It was a real cliffhanger.

Doing an Elvis
My arms started to ache with the pre-move hesitation and I was suffering from a serious bout of what climbers call ‘disco leg’ – otherwise known as ‘doing an Elvis’. So I climbed down to the ledge below to rest and psyche myself up

“Don’t think about it, just go for it,” was the call of encouragement from below. So in my own time I just went for it. I locked my feet and left arm into position, swung my hips out and up and reached my hand over the top of the boulder.

Just at the moment when my body weight started to pull backwards, my hand cupped a small dip in the rock. With huge relief, I hauled myself over the boulder and stood elated on the ledge above. I was struck by a real sense of achievement. I had faced my fear and overcome it.

From the ledge it was just a short spurt to the ridge of the cliff. As I topped out, the fiery Autumnal sun set behind Longships Lighthouse offshore from Land’s End. Climbing at Sennen was an awesome experience that challenged and inspired me. We’d been extremely lucky with the weather but it was a real privilege to experience climbing perfection so close to home.

See our pick of the ten best climbing venues in Cornwall >> 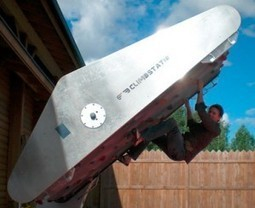 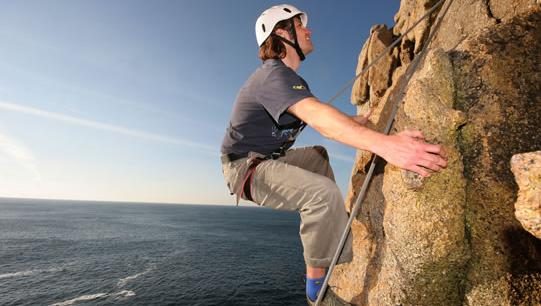