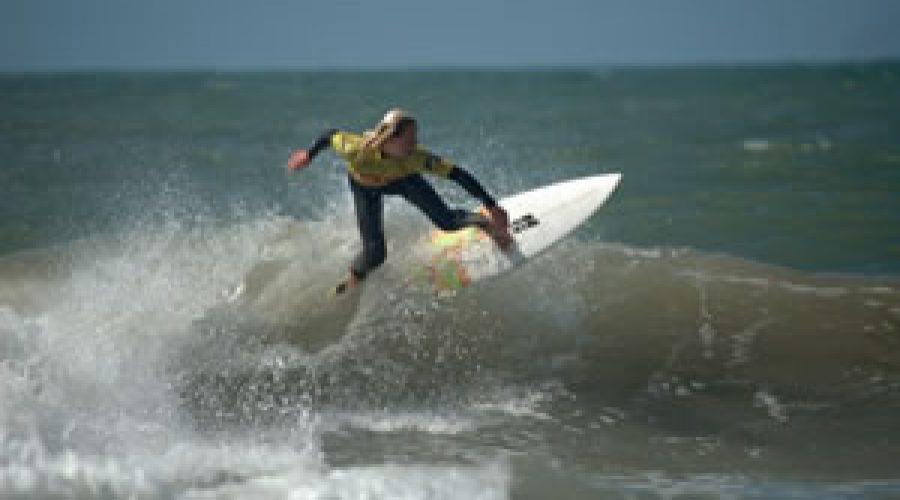 Cornwall’s finest managed to scoop some of the top winning spots at this weekend’s Jesus Surf Classic. Looe’s Gabi Rowe took the Women’s Open and Junior titles along with Josh Piper picking up the men’s Juniors.

The 18th running of the ‘Jesus Surf Classic’, was held over the weekend of 11th and 12th September in some great early autumn sunshine with onshore but fun waves.  Croyde bay once again was the venue for this long running and very successful event organised by Christian Surfers UK. Despite there being three others key surf events taking place this weekend, the organisers of the ‘Jesus’ were really pleased with over 100 competitors.

The ‘Jesus’ Surf Series due to its increasing popularity was split again this year between the traditional event at Croyde, and the Jesus Longboard Classic to be held at Polzeath over the weekend of October 16th and 17thth. For the first time this year, a new Groms division (U12) was launched, to encourage the development of this key age range.

Conditions for the eight categories started off on Saturday morning with a stiff onshore wind and sets of around 2ft – 3ft, with bright sunshine, after a pretty stormy night. By the end of day 1 the 24 heats run, had dwindled the competitors down to the semi final stage in all categories.

Sunday dawned with lighter winds from the North West and still a descent swell, despite the huge spring tides dropping out throughout the morning.  The semi finals and finals saw some outstanding surfing in all the age categories, as Croyde offered up some low tide bashable waves.

In the new Groms division a special mention should go to Garin Clay and Storm Wall who were only aged 9 and 10 respectively. The final was hotly contested with Newquay’s Angus Scotney taking the winners cash and trophy. North Devon’s Will Bailey and Alex Gibson came 2nd and 3rd, with George Hudson doing well in only his 2nd contest.  Ed Smith ( Liskeard ) took his first JSC winner’s trophy in the Youth event (Under 14) in a tight final, defeating Dale Foster (Newquay) and Georgehams Taz Knight.

In the Junior Women’s division (Under 18) there was a new name on the trophy with Looe’s Gabi Rowe celebrating a winners double in both this category and the ladies open event. Laura Crane from Braunton once again surfed well to take 2nd ahead of Lucy Campbell and 12 year old Flora Lawton.

In the Cadets division sadly Jobe Harris (Bude) who had surfed so well on Saturday had to withdraw from the final due to sickness, which meant Patrick Daniel was able to take the title ahead of Swansea’s David Williams, and Dale Foster.
In the hotly contested Men’s Junior (U18) category final, Josh Piper surfed really well to hold off Toby Donachie in 2nd, Alex Baker in 3rd and Patrick Daniel in 4th.

The women’s final saw an excellent contest with a Gabi Rowe triumph over a great performance from Sarah Beardmore, who just could not get a decent second good scoring wave. North Devon’s Laura crane managed to hold off St Agnes surfer Hannah-Beth Luke.

The Masters ( Over 35’s ) event this year was probably the most hotly contest since its inclusion eight years ago, with two quality semi-finals and a very entertaining final. South African born Bongo Hall took his first trophy ahead of last year’s winner Michael Plackett. Charley Charlesworth surfed well throughout, but just needed one more good scoring wave to push him into one of the two top places.

The final event of the day saw a great final in low tide Croyde conditions between four top class surfers in the Open Final. Stuart Campbell swopped 1st place with Toby Donachie a number of times  before claiming the large trophy and cheque for £300, retaining his 2009 trophy. Josh Piper who had surfed so well throughout both the Open and Juniors took third place ahead of Calstocks, Sam Scoble in his first Jesus Surf Classic final. As well as the trophies and cheques all the winners were presented with the new version ‘Surfers Bibles’.