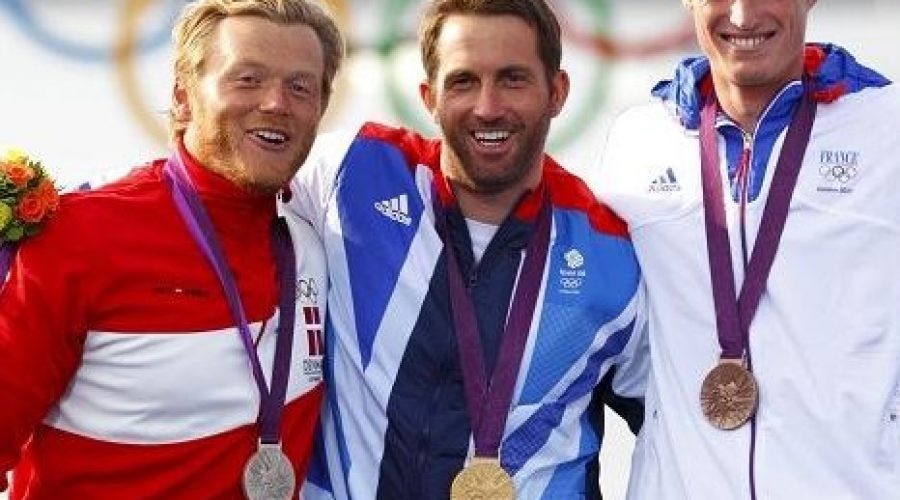 Cornwall bred sailor Ben Ainslie became the greatest sailing Olympian of all time during the 2012 Olympics in August.
The 35-year-old sailing legend, who learned to sail at Restronguet near Falmouth, eclipsed the record of Denmark’s Paul Elvstrom – previously the most successful Olympic sailor ever with four golds – by claiming his fourth consecutive gold and fifth medal in total in the Finn class at Weymouth and Portland.
Ainslie won Laser class silver at his first Games at Atlanta 1996 and three golds at Sydney 2000 (Laser), Athens 2004 (Finn) and Beijing 2008 (Finn).   In claiming gold Ben also matched the record for most Olympic sailing medals won in total, held by Torben Grael (BRA.
The six-time Finn World Champion went in to today’s double points medal race two points behind leader, Jonas Hogh-Christensen (DEN), knowing that to win that gold he had to beat the Dane.  In a nailbiting dramatic race Ainslie finished in ninth with Hogh-Christensen finishing the race in 10th to make history by finishing level on 46 points overall with Hogh-Christensen but winning the gold on account of beating the Dane in the medal race.
Speaking immediately after the race, Ainslie said: “It’s times like this you’re supposed to say something clever but I’m speechless. It’s been a really tough week but what a time to do it in front of your home crowd. I’m so glad for the people who have supported me over the years; my family, sponsors, the people watching. It’s been an amazing experience this Olympics, listening to the crowd makes the difference.
“After six races I was in a bit of trouble. I thankfully turned it around and got it right when it counts. I don’t want to go through anything like that again in my life. It’s been incredibly hard, there’s been huge pressure for people to perform at a home Games. It’s been the hardest couple of weeks of my life and I haven’t slept much the past couple of days. It’s unbelievable.”
Ainslie’s medal was Britain’s second of the day, Iain Percy and Andrew Simpson having won silver in the Star class an hour earlier.