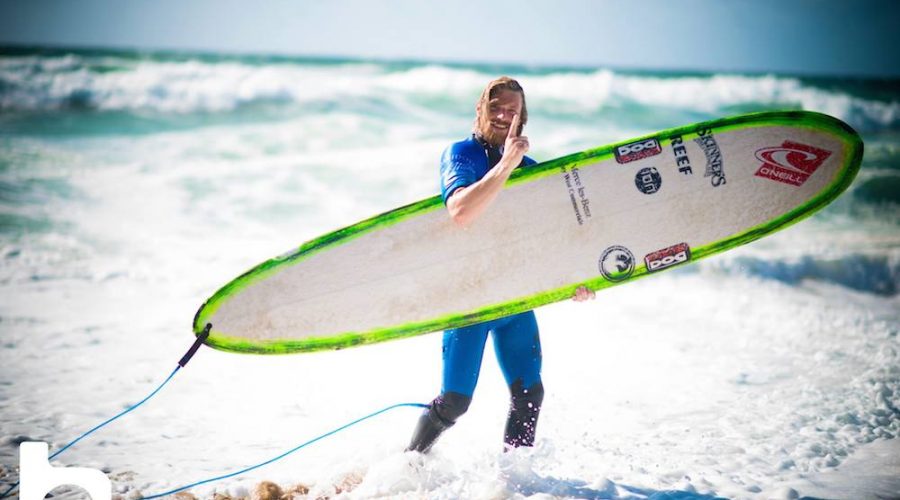 Cornwall’s surfers put on a fantastic show for the crowds at this year’s Boardmasters contest at Fistral Beach, with local surfers Ben Skinner winning the Longboard division and Alan Stokes finishing second in the Open.

Competing against surfers from all over the world, in challenging storm waves caused by Hurricane Bertha, the Cornish surfers showed their strength to take podium finishes in the UK’s biggest and best known surfing contest.

Thanks to a Supermoon that lit up the skies over Britain, the tide reached a massive high of 7.3 ft which brought the action close to spectators for a thrilling conclusion to the surf competition.

Surf commentator Nick Williams commented: “Our final day of Boardmasters 2014 has come to a close. Today started with super tough conditions on the low tide with the surfers way out, we needed every pair of eyes from the judges tent to identify every surfer in the line-up. Ultimately with the tide filling in during the day, conditions were a little bit more predictable and we once again saw a fully packed beach with capacity crowds. Despite one shower that came in of the ocean, today went pretty flawlessly.”

In the Longboard Pro division European champ Ben Skinner schooled all other competitors with an incredible aerial right in the shore breaks and some extreme tight radical carves, which had the crowd roaring and clapping. Skindog took the final ahead of his friends Adam Griffiths, Sam Bleakley and Sam Lamiroy.

The Women’s division saw the favourite and defending champion, Keshia Eyre, run away with the competition in the end with a well-deserved win.

In the Men’s Open Alan Stokes battled hard to come within one point of winning the final. He was held at bay by eventual winner Jock Barnes from Australia, with fellow Aussie Noah Lane in third and former champion Romain Cloitre take 4th place.

Nick Williams said: “Jock Barnes was flawless throughout the event with super strong and super solid runs to take the win. We had Alan Stokes cheered as he came out the water from the home crowd taking 2nd place. What an amazing event, everyone will have great memories of this year’s Boardmasters.”

With the wind blowing strong, the Pro Skate competition final was unable to take place. The results therefore were taken from yesterdays qualifiers and are as follows: