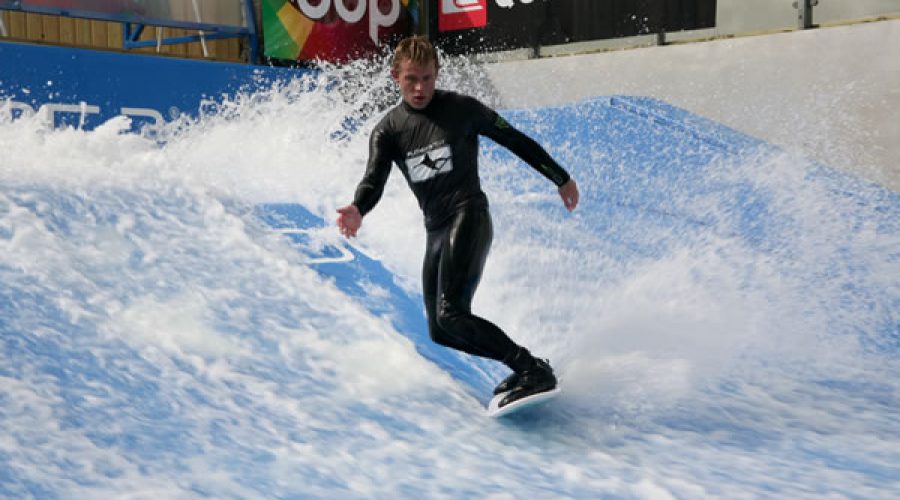 Surfers headed inland in early April for the launch of the UK’s first Flowrider ‘standing wave’ machine at Retallack Resort & Spa near Newquay.

Known as The Loop, the attraction offers boardsports enthusiasts a new place to practice their skills when the surf is flat. The machine creates a ‘wave’ by generating a thin sheet of water, no more than three inches deep, that flows at speed over a steep, curved bank. The Flowrider is likely to be popular with surfers, snowboarders, skateboarders and wakeboarders as it offers a unique environment in which practice carves and turns, rides and slides and manoeuvres. All in a safe setting with consistent conditions.

At April’s launch event, experienced riders entertained the mass of spectators with some impressive tricks, sometimes sending arcs of spray into the crowds. The British Junior Surf Team also showed up to test their board skills. “We have plans to create a wave pool the size of a football pitch which will produce a seven foot, peeling, barrelling wave,” said Mr Keyter.  “This will be consistent barrelling wave, whatever the conditions are like on the coast, and will be a world-first. It will be a world class training facility, which we hope will one day will produce a Cornish world champion surfer.”

These grand plans are a few years off but the Flowrider is already attracting the attention of boarders across the country, and in June the resort aims to run the UK’s first ever multi-discipline Flowrdider competition featuring some of the country’s best surfers and boarders.

In the meantime, visitors can enjoy the Flowrider which is sponsored by global surf brands Roxy and Quiksilver. The Loop is open to members of the public who can take stand up (flowboarding) or lying down (bodyboarding) lessons with instructors.

Checkout this activity for yourself at Flowrider Cornwall >>