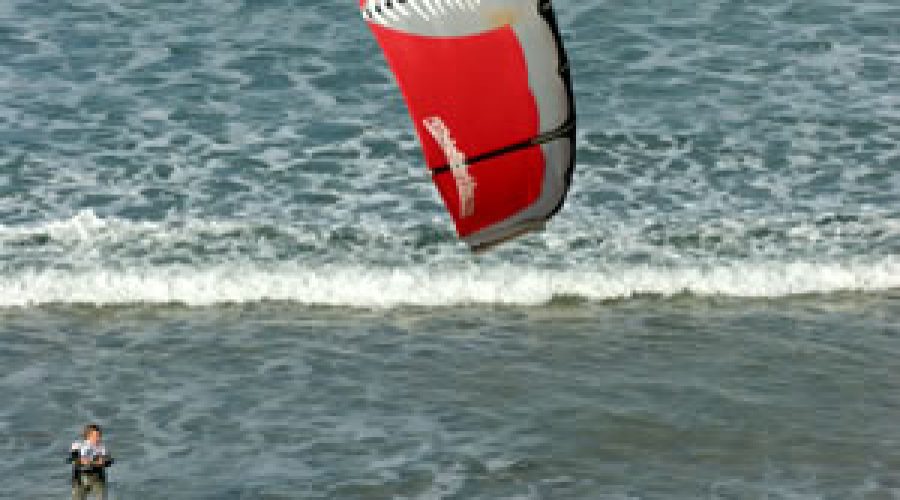 Britain’s best kitesurfers will start the 2010 championships with a new course racing event in Cornwall in April.

Athletes including the current ladies world champion will be at Watergate Bay to compete in the British Kite Surfing Association (BKSA) National Course Racing and Wave Jam. The event, hosted by the Extreme Academy, will be held from Friday 16th to Sunday 18th April.

Friday 16th will also see the official announcement that the BKSA has succeeded in attaining recognition for kitesurfing as a sport from Sport England, which will enable clubs and individuals to apply for development grants and Government funding.

BKSA Chairman Richard Gowers said: “2010 is set to be a great year for kitesurfing: we’ve been campaigning for five years to get the sport recognised by Sport England, and this comes at a time where kitesurfing is attracting more new participants than ever.

“Watergate Bay has been involved in the sport from the start – the kitesurf school there was one of the first in the country – so it’s great to be able to have Lisa O’Keefe (Director of Sport at Sport England) with us at Watergate Bay to celebrate this news at our first event of the year.

”With up to 30 competitors taking part in each heat, kitesurf course racing is highly entertaining to watch. Technical ability is key to success, with racers required to sail up, down and across the wind to navigate a triangular course marked by buoys.

Competition will take place in four divisions, split into professional and amateur categories for both men and women.

Westcountry kitesurfers will be well-represented at the event: Cornishman Denzil Williams, from Par near St Austell, is the current British course racing champion and no stranger to kitesurfing at Watergate Bay.

For Denzil, the start of the race is one of the most exciting elements for both competitors and spectators. He said: “It’s a bit like Formula 1 racing where you’ve got the whole field trying to get to the front as the starting hooter blows. You can have up to 30 people in a race, and everyone is trying to time their run so they hit the start line at the same time. It can be chaos and occasionally people’s kites get tangled.

“The discipline is really technical and the standard of competitors is so high that just one mistake can make the difference between winning and losing the race. So much can go wrong in a race, like picking the wrong tack or mis-timing your turn around a buoy. To win races requires fitness, strong legs, the right equipment and more often than not a good bit of luck as well.”

Exmouth’s Steph Bridge will be a strong favourite in the women’s event. As the reigning world course racing champion she knows more than most about the sport.

Off the water the kitesurfers will be celebrating their sport’s new official status at the event party on Saturday 17th April. Starting at 8pm, the £10 tickets include entry to The Beach Hut, a buffet and music from a DJ. Tickets are available from Alison Payne on alison@watergatebay.co.uk