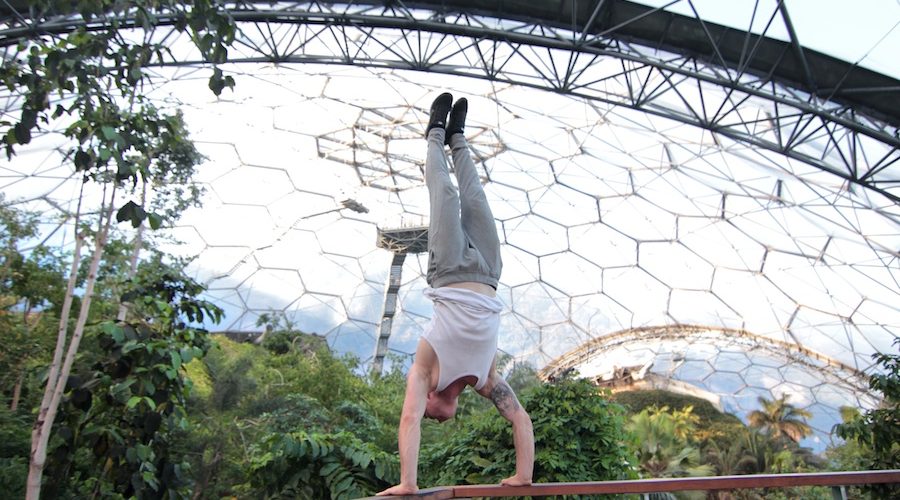 Two of the world’s best freerunners, Tim “Livewire” Shieff and Pip “Piptrix” Andersen, have been hitting new heights at the Eden Project for a new video.

The pair spent two days at Eden performing parkour tricks in the project’s Rainforest and Mediterranean Biomes as well as taking to the colourful outdoor landscape.

The film focuses on the new Rainforest Aerial Walkway and ends on a spectacular shot of the Tim and Pip performing backflips and somersaults on the roof of the giant Rainforest Biome.

Rita Broe, Eden’s Strategic Marketing Director, said: “It was great to see how Tim and Pip, two of the world’s best freerunners, were inspired by the Eden landscape and our new Rainforest Aerial Walkway to perform stunning tricks. Their incredible skills make for one of the most spectacular – and fun – videos we’ve ever produced.”

Tim and Pip are both members of London’s high-profile Storm Freerun group and are considered to be some of the best proponents of the sport in the world. Tim starred in a race through BBC Television Centre in the latest series of Top Gear and Pip recently appeared in a Spider-Man-themed advert for electronics giant Sony.

In 2009, Tim was named the Barclaycard World Freerun Champion. In the same year, both athletes appeared in MTV’s Ultimate Parkour Challenge.

The new Rainforest Aerial Walkway is a major addition to the Eden Project this summer, providing visitors with remarkable views through the treetops and giving an insight into the lives of people who live in the rainforest.

Other attractions this summer include the addition of beautiful tropical butterflies into the Rainforest Biome, England’s longest and fastest zip wire, the return of the ever-popular den-building activities, and summer evenings full of live music and al fresco-style dining.

For more information on the Eden Project or to book tickets, see www.edenproject.com.