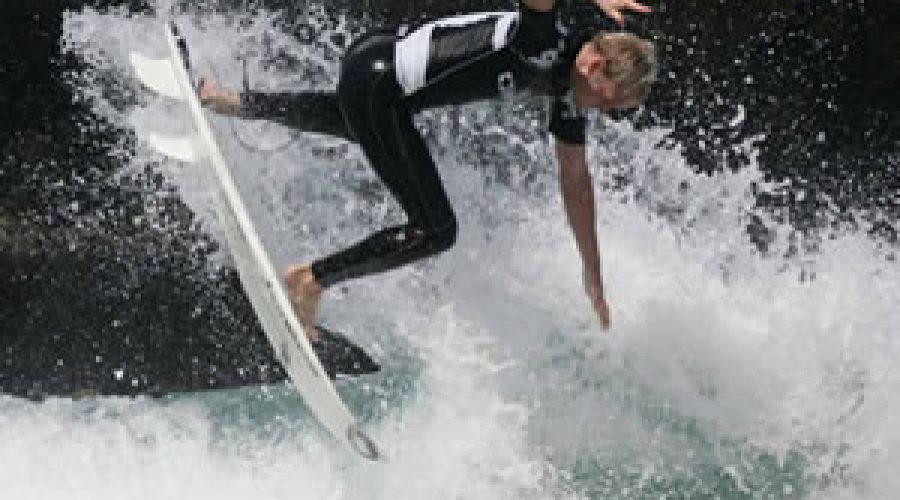 Thumping double-overhead waves provided the canvas for an impressive display of surfing at Watergate Bay in May in the new format English Open Championships.

With Saturday’s pulsing 6 to 8ft swell on the limit of contestable conditions, organisers opted to run only the elite Open division. But by Sunday the waves had dropped to a more manageable 4ft, allowing all eight divisions to be completed in fun, albeit choppy, surf.

Newquay-based Johnny Fryer claimed the presitigious Open division title in a closely-fought heat. Any of the four finalists – who included Cornishmen Josh Ward, Andrew Griffen and Shaun Skilton – would have been worthy winners.

“It was a crazy final,” said a delighted Johnny Fryer after receiving his trophy as the English Open champion. “The boys were all ripping, there were a lot of waves ridden, and it must have been super, super close. Before the final I really wanted to win this, but everyone was ripping so I thought I was out of it. I’ve wanted to win this for ages. I’ve been second and third before and I just didn’t want another second. It feels great.”

In the Longboard Open, Newquay surfer Ben Skinner’s recent run of form continued as he beat off competition from defending champion Ben Haworth to win, while Candice O’Donnell retained her Women’s Longboard title.

Just four weeks ago both Skinner and O’Donnell were standing on the podium in Tapia, Spain, having won their respective European qualifying events for the Association of Surfing Professionals (ASP) World Longbord Tour. For Skinner, another win reinforces his position as Europe’s top longboard surfer.

“It’s been really good month, I’m having a good time,” said an enthusiastic Ben. “I surfed yesterday in the Open and it was really hard work. Everyone was taking 20 minutes to paddle out, but the waves were really good.

“We were lucky with the waves, and the event didn’t have a headline sponsor so to even be here is good in itself, and a lot of that is down to Pauly (Jeffery)’s hard work and the support of Tidal Productions and the Extreme Academy at Watergate Bay.”

As well as the prestige of winning national titles, the top-placing surfers gain qualification for the English team, which will take part in the European championships in Jersey from 26th September to 4th October.

“Our surfers don’t often get the chance to prove themselves in decent waves, but they certainly did on Saturday, and they certainly impressed me and the judges,” said organiser Pauly Jeffery of the English Surfing Federation.

“There was a lot of committed surfing in some fairly chunky waves. There was a lot of paddling, a lot of hard work, and the good surfers got rewarded. I would also like to thank the RNLI and Watergate Bay SLSC for providing safety cover for the event, particularly on the Saturday.”