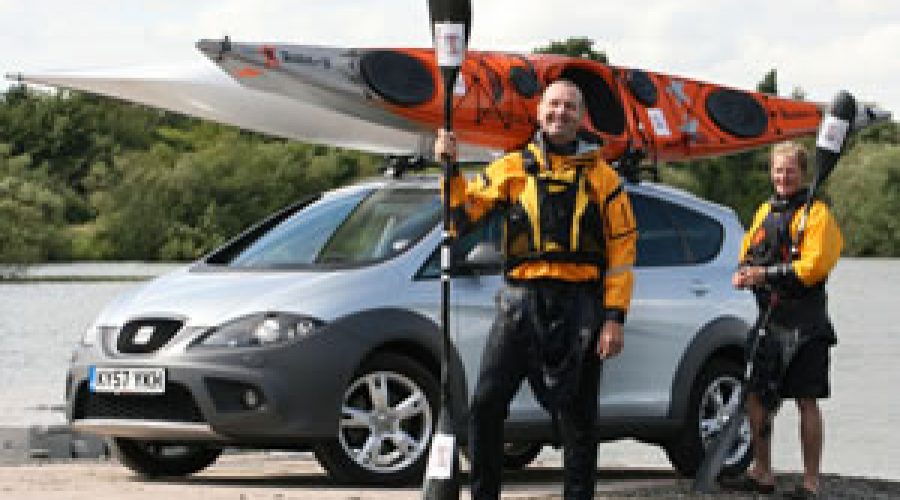 A former Olympian and adventurer will this week embark on a daring bid to become the first person to cross the North Sea from Scotland to the Faroe Islands by sea kayak.

Patrick Winterton will attempt the treacherous crossing as the final part of his 1,200 nautical mile (NM) recreation of 6th Century monk St Bernard’s epic religious quest from Ireland to the Faroe Isles.

The 46 year old, from Stirling, will be joined by Mick Berwick, 51, from Sutton Coldfield for the final 255-mile leg from Stornoway on the Isle of Lewis to the Faroese capital, Tórshavn, during which the pair are likely to face huge waves, freezing temperatures and storm force gales.

All previous attempts at the crossing by kayak have failed, with the various would-be record-makers falling foul of obstacles as diverse as hypothermia, sleep deprivation and exhaustion to dehydration and even hallucinations.

The arduous journey will take Patrick and Mick through some of the world’s most inhospitable waters and, at around 3NM per hour, it’s expected to take up to 100 hours to complete. At one point, they will have to paddle solidly for around 50 hours to reach dry land.

Snatching only occasional moments of sleep, and paddling through the night, the pair will also have to keep an eye out for huge Atlantic trawlers and oil rig support vessels in the busy sea lanes. Their position will be all the more vulnerable as their sleek 18ft boats will be invisible to radar.

Yet despite the risks the dynamic duo, who are being supported in their adventure by sporty Spanish car maker SEAT, can’t wait to hit the water and get their challenge of a lifetime under way.

An excited Patrick said: ‘I’ve been involved in kayaking for 12 years and for all that time this trip has been at the back of my mind.  I’ve even lain in bed at night wondering whether it’s possible, and it’s taken me this long to believe that it is.

‘This is the Mount Everest of British sea kayaking and I’ve reached the stage where I’ve done all the other challenging routes. Now there’s nothing left but to go for the big one.’

But alongside his anticipation, Patrick admits there is  a degree of trepidation.

‘It is dangerous and I do have concerns, but it’s impossible to know what the biggest danger will be until we actually get out there’, he said.

Steve Robertson, Head of Marketing for SEAT UK, said: ‘We’re very pleased to be able to support Mick and Patrick with this challenge and wish them the very best of luck.  This sort of exhilarating and sporty challenge represents the adventurous SEAT spirit perfectly.’

Patrick and Mick’s journey will begin with the long drive and ferry crossing required to reach Stornoway on the far tip of the Outer Hebrides. There, they will liaise with local Coastguards and wait for a suitable weather window before embarking on the first stage of their trip.

Day one will see them paddle from Stornoway, the main port of Lewis, to the Butt of Lewis – the most northerly point of the island and officially the windiest place in Britain – 30NM away. Paddling at around three nautical miles per hour, the trip will take them around 8-10 hours.

Once at the Butt of Lewis, the duo will set up camp and wait for another suitable weather window before setting off on stage two, paddling 40NM north, north-east to the tiny, remote and uninhabited island of North Rona.

On North Rona they will again camp and wait for the thumbs-up from the Coastguards and weathermen before pressing on with the longest and most dangerous phase of their challenge – the 150NM journey from North Rona to Vágar on the Faroese island of Suduroy. This stage of the trip will take them to their furthest point from dry land and through the most extreme conditions they are likely to encounter.

Crossing this stretch will take at least 50 hours of paddling and is where most of the handful of other kayakers brave enough to attempt the challenge have come unstuck.

If Patrick and Mick make it through, the most difficult leg by far will be behind them. All that remains then will be the more manageable 35NM paddle from Vágar to Tórshavn past many of the other 17 Faroe Islands.

The duo will make the crossing in matching 18 ft Tiderace Xplore sea kayaks with on board sealed storage compartments in which the duo will carry equipment and supplies weighing around 40kg. Their cargo includes a marine radio and satellite phones to communicate with other vessels and the mainland, a change of clothes and basic camping equipment. Each boat will also carry 25-30 litres of drinking water and high-energy food such as potatoes, pasta and tinned sardines.