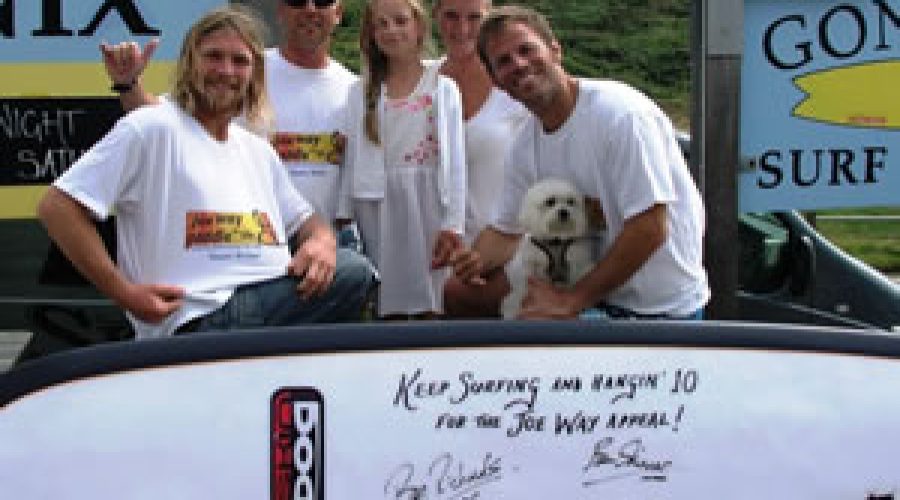 Launch of the Joe Way Paddle for Life The Joe Way Paddle for Life is a charity event focused on raising awareness of Joe Way’s story and inspiring people to raise money for any registered charity they want. The event will be held on the 3rd of September from Newquay harbor and is aimed at all levels and ages you can enter a team or as an individual.

The original Paddle for Life started after lifeguards from Fistral Beach held a Joe Way memorial paddle to raise money for the Precious Lives appeal in 2008.

Joe is the inspirational little boy who died in May 2008 and the website about his story has touched people’s lives around the country and beyond.  Claire Way Joe’s mum said “his story of hope and fighting against all the odds with a cheeky smile has made what could have been the worse of times the best of times”.

The aim is to raise awareness of Joe’s story and inspire people to raise money for their chosen charity, to promote the paddle as a community event for people of all abilities and within five years to have 50 paddles and to raise £50,000 for various charities.

Precious Lives have already raised £2.6 million of the £5 million needed to build the hospice and the building work will start in 2010. Cornwall needs this facility so be inspired.

The rules are that you must paddle some sort of craft or board between two points (which don’t have to be fixed) and raise a minimum of £25 for any registered charity.  If you would like to enter a new distance or idea just contact the web site and they will add it to the on line form linked to the event you are attending or holding.

Star of ITV’s “The Bill” Ben Richards and long board champion Ben “Skindog” Skinner took to the waves to launch the “Joe Way Paddle for Life”.  Ben Richards enjoyed some surf lessons from Europe’s finest and the duo signed one of Skin dog’s concept boards which is a one off never to be made again display board.

Ben Richards has donated a copy of a script from “The BILL” signed by the cast. To be in with a chance to win these prizes you can enter the draw by registering on the paddle site lucky draw and donating £10 don’t miss this opportunity to own this display board and a signed script from ITV’s “The BILL”.

To see how you can be part of the Joe Way Paddle for life go to www.joeway.co.uk and click on the paddle logo