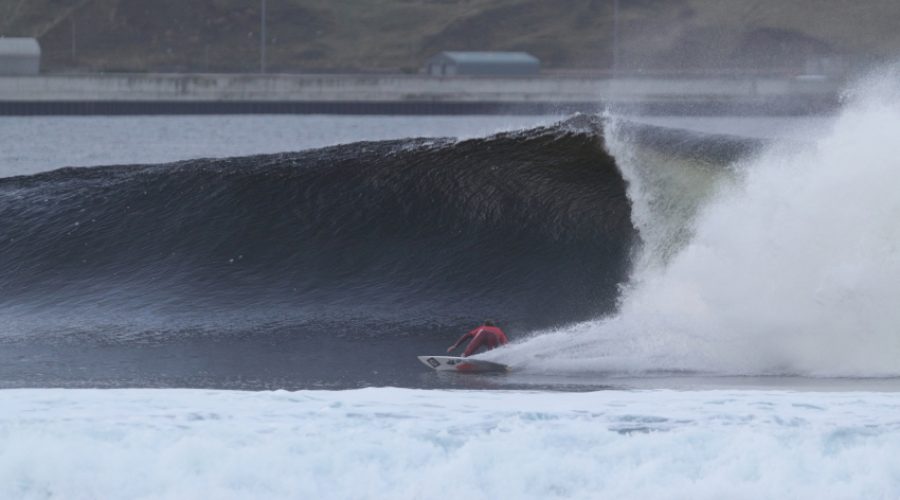 Luis Eyre wins this year’s Thurso Surf Festival held at Thurso East. In what was considered by many the best waves ever for a British surf contest. 6 – 8 ft perfect off shore barrelling waves.

Luis commented “It has been a fantastic event; some of the best waves I have ever surfed in an event against the best surfers in the UK. I have enjoyed coming to Thurso only for my second time and to win in such good waves is unbelievable. Even though I managed to score a perfect 10 I was not guaranteed to win especially when Micah also scored a 10 point wave. On behalf of all the competitors I would like to thank the Highland Council and SSE for sponsoring this great event and look forward to coming back next year”.

This is the first time Luis has won an Open event on the UK Pro Surf Tour and sets him up for a chance to win this year’s Tour Title. Other challengers going into the penultimate event include Alan Stokes, Russell Winter and Gordon Fontaine.

Manchester born Portuguese team surfer Keshia Eyre (sister of Luis) won the her fourth event on the Women’s UK Pro Surf Tour this year in doing so giving her an unassailable lead in the rankings. She will now be crowned UK Pro Surf Tour Champion 2013 at the Surf Awards to be held in Newquay next weekend. Second place went to Devon based Hannah Harding, 2011 UK Pro Surf Tour Champion, third to Lucy Campbell and fourth local Thurso surfer Shona Blackadder, who suffered an interference call against her in the final.

In the Adams Surfboard U18 Boys division Taz Knight took his second win in a row managing to squeeze into a few barrels in the final. Second went to Portugal Based Aaron Strong. Third Bournemouth’s Miles Lee Hargreaves, fourth Lanzarote surfer Josh Braddock and fifth up and coming charger Ed Smith from Liskeard.

The Snugg Wetsuits U18 Girls was not a repeat performance of the Women’s final Peony Knight showed she has the ability to beat anyone on her day by taking the title. Lucy Campbell took a well-deserved second place with Flora Lawton third and Keshia Eyre fourth.

The first of the Beach Bum Under 16 Boys events was won by one of the most impressive surfers in the entire event. Aaron Strong who is now based in Portugal defeated a strong field of fellow competitors in one of his first events he has surfed on the UK Pro Surf Tour. Second place went to Welsh team rider Rhys Barfield, Third to Newquay based and current leader on the Beach Bum Under 16 Boys rankings Angus Scotney and fourth Crantock surfer George Hudson

The event was number 6 on the UK Pro Surf Tour, The good surf and weather helped make it a spectacular event and show why Thurso is renowned for having one of the best waves in the world. Many thanks must go to the Highland and Island Council, SSE, Red Bull, P20 Sun Protection, Adams Surfboards, Snugg Wetsuits and Beach Bum Surf Stuff for making the event possible.

For further information on the UK Pro Surf Tour visit the website: www.ukprosurf.com