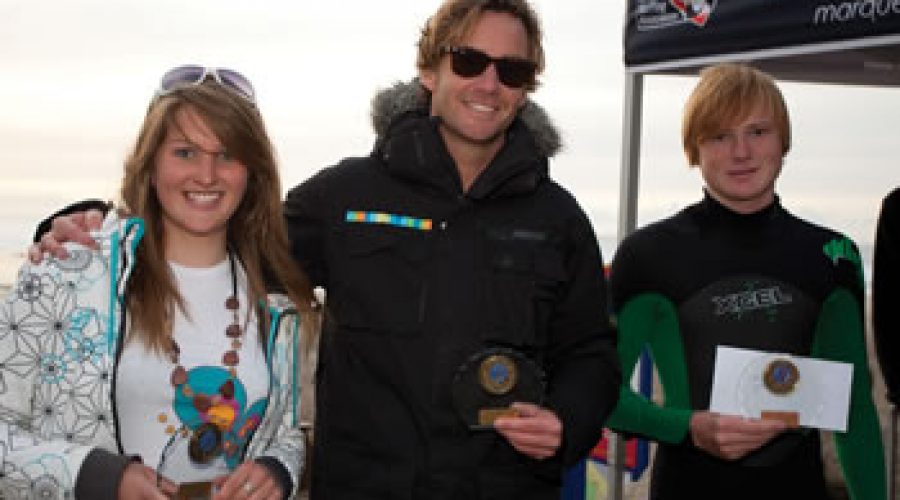 Three members of Rob Barber’s bodyboarding school cleaned up at the 2010 British Bodyboard Nationals last weekend. Rob Barber, Steve Hall and Tabby Fox were all crowned national champions in their respective divisions after a weekend of epic surf at Porthtowan.

With the swell stacked and the winds offshore, the scene was perfectly set for the 2010 British Bodyboard Nationals at Porthtowan on the weekend. However, Saturday’s clean six foot turned ugly on Sunday as the wind switched northerly, and competitors struggled to make the paddle through the lumpy onshore bombs.

Rob Barber was up against fellow British bodyboarding greats Damian Prisk, Joe Franklin and Chris Bray in the Senior division. Bray got off to a good start with a tight spin in the pocket followed by a big roll, but Barber was quick to answer with a similar wave, throwing in a trademark reverse to lead the heat. Prisk’s wide position in the line-up almost paid off, but Barber’s superior wave selection saw him clinch the final and solidify his status as one of the foremost authorities in British bodyboarding.

He said: “The conditions were epic this weekend, and the standard of bodyboarding across the divisions was superb. The weekend will go down as one of the best the BBC has ever had for sure, riders travelled from far and wide to make the event.

“To have showcased out sport in big waves here will hopefully have allowed people to see just what bodyboarding is all about. I am stoked with the win, and especially against such a high standard of competition in the final.”

In the under-18 division, Rob Barber’s Bodyboarding School team rider Steve Hall got off to a flying start by scooping into a wave just 30 seconds into his heat, throwing in a quick threesixty, trimming down the line and smashing  a section with one of the best inverts of the event, tweaked well beyond his years. He followed it up with another solid wave shortly after, and clinched his place as under-18 national champion whilst turning heads across the beach. The increased number of entrants in the women’s division was encouraging this year, and naturally led to a higher standard of competition. Four women battled it out in the draining surf as the conditions turned nasty, and at the halfway point in the final each rider still had a shot at the title. However, it was here Rob Barber’s Bodyboarding School team rider Tabby Fox turned it up a notch and whipped a few textbook spins in quick succession to elevate her above fellow finalists and on to become the women’s national champion.

Tabby was stoked: “I am so pleased with the result, I have trained really hard for the event and Rob’s coaching has helped me lots, he’s been a massive support.

“The conditions were testing, the paddle out was a mission, it took well over five minutes to make the paddle, and the size of the surf made tricks challenging too.”

Rob Barber’s Bodyboard School also sponsored the under-14 division. The finalists made
the most of the challenging surf by carefully snagging the reformed waves on the inside. Each rider showed great control and speed, with Sian Spooner coming close to landing a number of el rollos and Jamie Loweth and Ryan Bullen almost perfecting threesixty spins. Sam Crabtree’s decision to go the paddle and catch two bigger waves further out secured him the title of under-14 national champion.