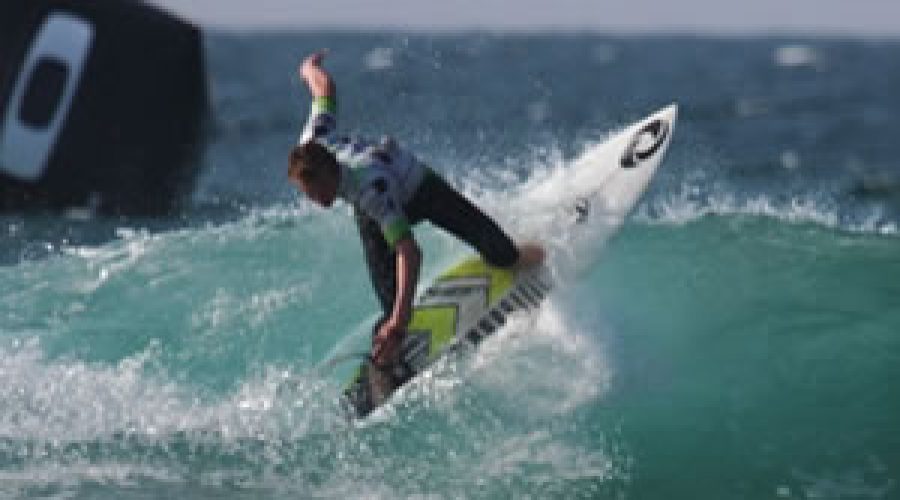 The Oakley XPY Pro Junior exploded onto North Fistral beach with competitors and spectators alike greeted with sunshine and head high fun waves!
All surfers & spectators stunned by the debut of the new digital clock system, an automatic countdown timer for surfers in their heats. Also, on the horizon, a large Oakley Buoy, to mark out the contest area & to the give the event an ASP world tour feel!
Day one kicked off with the first round of the Pro Junior category, standouts included Jayce Robinson from St. Ives, Toby Donachie from St. Merryn & Lewis Clinton from Newquay, all posting high scores to advance them through to the next round.
Next up was the Under 16’s category, which included the countries top young surfers making strong performances, Beau Bromham, Leon Mansfield & Tom Good.
The Pro Junior & Under 16’s category was wrapped up till sunday’s surfing, but the contest continued with the under 16’s girls category and under 12’s division. Impressive performances from all surfers across both categories.
Later on in the evening, the contest party kicked off at the Fistral Beach Bar with DJ Blacc Jazz & DJ Tom Project coming on board to keep the party alive to the early hours of the morning!
The Next day, surfers arrived to another perfect contest setup, light winds, 2-3ft surf & blue skies!
Early standouts included Newquays’ Harry Timson, Jack Whitefield, Josh Piper & Woolacombes’ Will Bailey & Newquays’ Harry Timson.
The finals came round quick, first up with the Under 12’s Finalists. A strong show from Britains new blood, a good sign that the future of surfing is in good hands! Will Bailey took the win, with Alex Gibson in second position, Angus Scotney in third and Max Payne in Forth Respectively.
Next to enter with water was the Under 16’s Girls.  Lucy Campbell performed to a high standard under the watchful eyes of the UK’s best Judges to take first position, second place went to Gabi Rowe, third place, Jemima Knight and fourth, Jaide Lowe.
This years Under 16’s winner’s trophy was taken by Leon Mansfield, with second place Tom Good, third place, Max Tucker, and fourth place Beau Bromham. The climax of the afternoon’s was the Pro Junior Final. The surfing was at an exceptional level, with Jayce Robinson taking the win, with Lewis Clinton taking second place, third place Alex Baker from Croyde & forth place young Harry Timson from Newquay.
The presentation consisted of finalists having to ask members of their family up to help take away their prizes, which consisted of a bag of Oakley & Globe goodies, an Xbox 360, and a huge Oakley/XPY trophy!