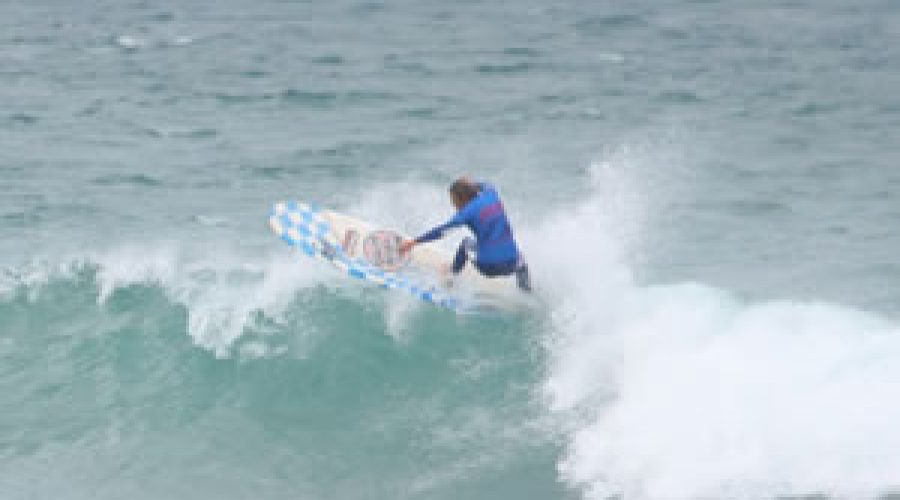 Great weekend of Surfing sees the third Jesus Longboard classic end in style. With a great swell forecast and a full line up of competitors including some of the best longboarders in the country the third ‘Jesus Longboard Classic’, run by Christian Surfers UK, was all set to be the most exciting and competitive to date. Surfers had travelled from a far afield as Yorkshire, Wales and Kent to enter the event. The weekend did not disappoint in any way with fantastic two to four feet waves, a really high standard of longboard surfing, and the all-round good vibrations and family atmosphere the Jesus Surf Series is now becoming renowned for.
The two-day event saw over eighty competitors battling it out in four categories: Women’s Open, Juniors, Masters, and Open divisions. There were also two special trophies added this year: the “Wavehunters Longest Noseride”, which was won by Sennen’s Sam Bleakley with a ten second noseride, and the “Surf’s up! Most Progressive Manoeuvre”, which was taken by current European Longboard champion Ben Skinner.
With the largest number of women surfers competing in this year’s event it made for a really competitive division, but it was Porthtowan’s Dominique Kent that dominated from the start, adding to her 2007 title by winning again this year. Juliet Marlow (Braunton) also surfed well throughout the event and came second, with Karma Worthington (Croyde) and Alexa Poppa taking third and fourth.
It was great to see such a high quality of surfing from the younger surfers, with the clear stand out in the Junior division being Mike Lay, who went all the way to take the title. Bude’s Lewis Stritch took second with Trev Garland only 0.1 point behind in third. With great performances in earlier rounds Zac Lawton took a well-earned fourth place.
The Masters was dominated by Mark Goodright, with some impressive surfing all weekend he took the Masters title in fine style. With less than a point separating the rest of the finalists it was a close call for the remaining places. Colin Bright came out second closely followed by South African Richard “Bongo” Hall and Plymouths Gary Calladine.
With the majority of the top UK longboarders entering this year we were in for a real treat in the Open division. Right from the start the standard was high and with stacked heats all through Sunday there were several close results, especially the first semi-final where first to fourth were separated by just 1 point. It was World number three Ben Skinner who eventually took the title, but it was a close call with Adam Griffiths ( Newquay ) pushing him all the way in the final and eventually coming in second. Michael Lay picked up his second trophy of the weekend by taking third and Trev Garland came in fourth, both with some really impressive  surfing.
Throughout the weekend at both of the “Jesus Surf Series” events, held simultaneously in Polzeath and in Croyde, funds were being raised to support the work of ‘Shelterbox’ and ‘Holidays with a Purpose’ as they continue to assist the areas so desperately affected by the recent Tsunami in Somoa, and earthquake in Sumatra, leaving hundreds dead and tens of thousands in need of shelter and medical assistance.