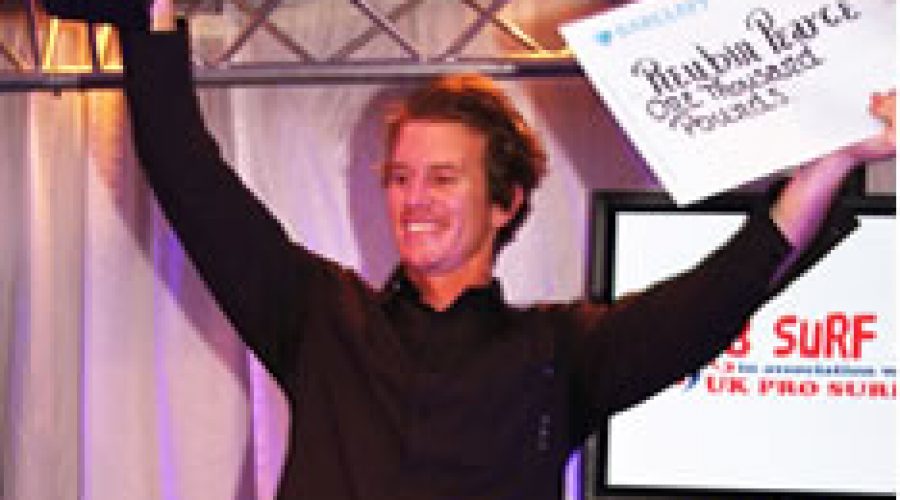 Pearce, who lives in Newquay, clinched the title from the UK’s best surfers after a dramatic final event – the Animal Newquay Open at Fistral Beach. Reubin only had an outside chance of clinching the title going into the event. He needed Sam Lamiroy to be eliminated early and then had to place well in the final ahead of Alan Stokes, which he achieved.

It is the second time that Pearce has won the tour which each year gets bigger and better, showcasing the cream of British surfing at surf breaks throughout the country.

The tour culminated with the awards presentation, which is an annual celebration of the UK’s thriving surf scene and individual achievements.

The accolades consisted of awards based on the results of the 2008 UK Pro Surf Tour as well as brand sponsored awards for individual achievements in all areas of surfing which were decided by a panel of surfing and industry professionals.
The Women’s tour was dominated and won by Irish surfer Nicole Morgan. Back from a year in Australia she only lost one event entered and that was to fellow Irish Surfer Easkey Britton. Tom Butler had a remarkable year and despite being over shadowed by Reubyn Ash and Jayce Robinson won the 2008 UK PST Pro Junior Title.
The Under 16 Boys division was very competitive throughout the year, however with great determination and incredible ability Toby Donachie took the title. Despite fantastic performances from many of the Under 16 Girls, Zoe Sheath from Isle of Wight dominated, not losing one heat all year to take the title.
The future stars of British surfing look to be coming from the youngest division. The Under 12 Open this year was very competitive. Two surfers became the major challengers to the title, Dale Foster of Newquay and Ed Smith of Liskeard. They exchanged the lead several times through the course of the year with Dale eventually taking the title.
The awards and winners were as follows…
2008 SURF AWARDS – IN ASSOCIATION WITH UK PRO SURF TOUR
Sponsored awards:
1.  Fat Face Most Improved Surfer 2008 –  Winner: Reubyn Ash (Bude) This year has seen him make his mark on the worldwide surfing scene.
2.  Saltrock Rookie of the Year 2008 – Winner: Jayce Robinson St Ives. The surfer with the best result in his first full year of doing the UKPST.