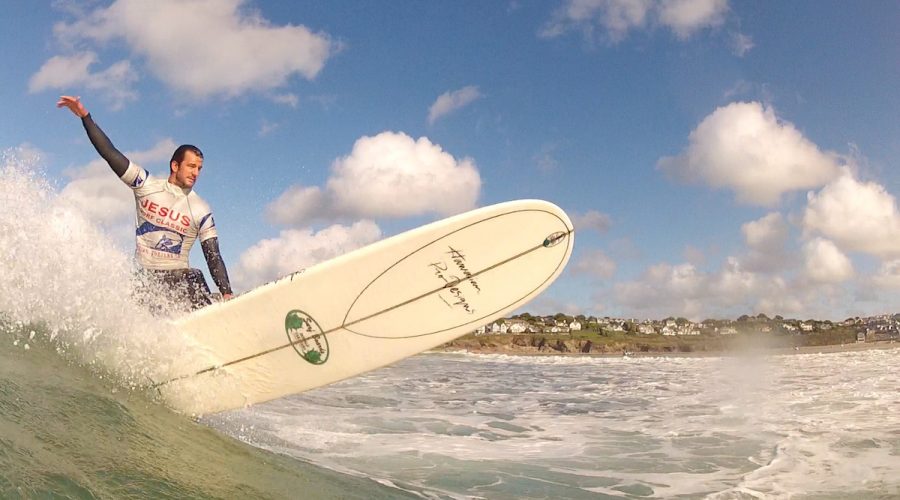 Longboard surfers enjoyed near perfect conditions for the final event of the Jesus Surf Series, the Jesus Longboard Classic, which took place in Polzeath over the weekend of October 19 and 20th.

Despite the forecast for howling winds and strong rain, Saturday’s conditions were clean, cross/offshore and for most of the day sunshine blessed the contest venue of Polzeath. Sunday’s conditions were always going to be more of a challenge, but even they turned out to be nowhere near a problem as was feared, meaning the finals were held in pretty clean 4-6 foot surf, allowing some of the top long boarders in the country to put on a fantastic display of progressive surfing.

Since its inception in 2006, this event has become synonymous with the closure of the main longboard contest season, a great opportunity for long boarders from throughout the country to come together and be involved in a top class event, and to be able to enjoy the hospitality which the Tubestation in Polzeath provides.

This year just under 70 long boarders took part, in an event which is run by Christian Surfers UK, and had great support by the sponsors ‘Nineplus’, ‘Finisterre’, ‘Era adventures’, ‘360 photography’, and of course the ‘Tubestation’. Over the two-day event competitors battling it out in four categories: Women’s Open, Juniors, Masters ( Over 35’s), and Open divisions.

Saturday started with breakfast provided at the contest site, and heats running throughout the day, so that by around 5:30 PM on day one, over 20 heats had been run in great conditions, with many shirt sleeved spectators watching the action. By the end of the day the organisers had run through to semi-final stages in both the Junior and Open divisions, and the finals for both the Masters and Ladies.

The evening entertainment was provided in the way of a film night with crêpes, and nearly hundred of the competitors and crew turned up to watch the movie ‘The heart and the Sea’.

Organisers woke early on Sunday morning to check to see just how big the predicted storm had made the surf, and were relieved to see that whilst the surf was now in the 4 – 6 foot range, the wind direction meant that it was actually pretty clean and very contestable.

As is the tradition the day started with breakfast, and was then followed by a simple ‘surfers blessing’ which took place in the Tubestation, where competitors and congregation alike were challenged with the question of ‘Who do you surf for?’ This was followed by Hawaiian lays being given to everyone and water blessings handed out to those that wanted it, from the local Church leader.

In order to make the best of the conditions on Sunday, two peaks were run for a couple of heats, and therefore by around midday the final final was hitting the water.With regards to action in the water the women’s event was dominated by a very inform Emily Curry from Bude, who not only became women’s champion, but the BLU 2013 champion, also won the total commitment prize for three back-to-back heats on Sunday in challenging conditions, as she also got fourth place in the Junior division.

In the largest of the categories the Masters, competition from early on had been really tight, and in the large conditions of the final Llantwit’s Colin Bright took the title, for the second year running in a tightly fought contest ahead of popular Taunton based Rob Davin coming a close second, Ciaran McQueen third and Eric Davis (current BLU Grand Master champion) taking fourth.

The Junior final was a real close battle between Jack Unsworth and Aaron Bright, both who were showing total commitment in the chunky conditions, with North Devon’s Jack taking victory over Aaron and local Wadebridge surfer Jago Beer- Robson getting third and Emily Curry, who must have been shattered taking fourth.

The Ladies division this year saw some tight semi-final heats, but in the final there was only one real standout surfer, with Emily taking the title with a score of 15.9. In a tussle for the other places Jenny Briant from Camborne was second just beating Nicola Bunt with Charlotte Bayliss from Barnstaple taking a creditable fourth place in the final.

From early on though it was evident that Angus was not going to relinquish the trophy easily, and took firm hold of the final winning through with a combined score of 17.57. Aaron chased him all the way but could not make up the gap in second, with Connor and James fighting it out to the dying seconds in third and fourth respectively.

At a packed presentation BLU head honcho Minnow Green was invited to present the prizes, before a minutes silence was held for Pete ‘Chops’ Lascelles and ‘Dave the wave Hall’, both who had passed away recently and both had a real home in the hearts of many present and the wider longboarding community. The tributes were led by Eric Davis.

By the feedback received, it felt as though this was the best Longboard Classic yet held at the Tubestation, with a real feeling of family and community, rapturous applause for all the winners, and some great speeches from the champions.

At the presentation contest director and head of Christian Surfers UK Phil Williams shared about a prayer time he and some of the other team had first thing in the morning when they looked at the large surf and were concerned for the safety of the event. He was directed to a verse in the New Testament section of the Bible, which encouraged the team that even when they feel inadequate and undeserving if they ask in faith believing in God he will grant their prayers. It certainly felt that those prayers had been answered.

So a big thanks to all involved especially all the Tubestation and Christian Surfers volunteers, the sponsors, Cornwall Council, and Annes cottage for use of the beach, and Era for the water cover. Also a big thanks to the surfers of Polzeath for letting us use the beach, all the competitors, family, and friends, and finally a big thanks to God for providing enough clean offshore waves to complete this hugely popular event.