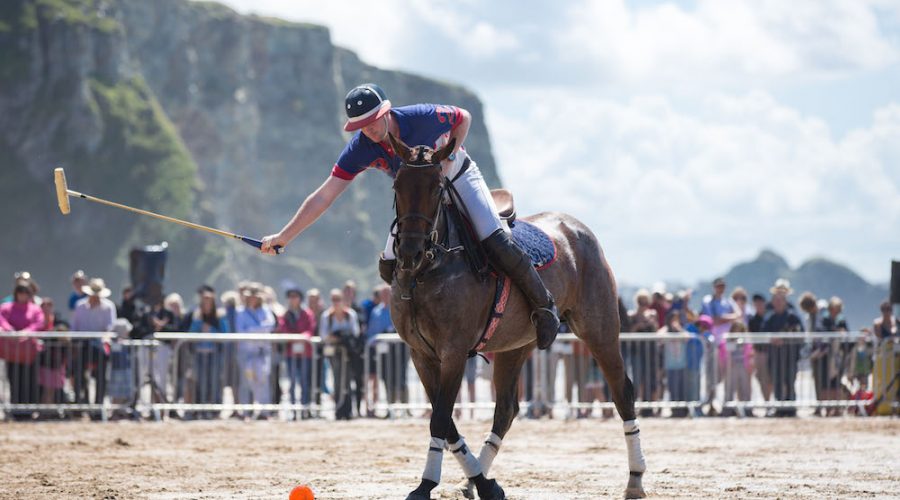 Polo on the Beach Pulls in the Crowds

This year’s Veuve Clicquot Polo on the Beach at Watergate Bay was a huge success with a record number of spectators turning out to watch the display of equine skill.

Now in its eighth year, the popular sporting event hosted by Watergate Bay Hotel kept the crowds entertained with a series of polo matches and entertainment over the first weekend in July.

On Saturday an action packed day included riding displays from The Stampede Stunt Show, after which the polo got underway with the UK’s first professional all-ladies beach polo match featuring teams from South West Polo and Veuve Clicquot with a line-up of rising female players from across the UK.

Phillipa Fitz-Henry, who was awarded the most valuable player trophy, said: “It was hard work out there today. The adrenaline was pumping and it was very competitive, but so much fun. We were incredibly lucky to play in such a perfect setting.”

Following supercharged displays from the ladies teams, the high goal Watergate Bay Trophy match between teams from First Great Western and Joules got underway. First Great Western clinched victory with a decisive strike from Tim Vaux to take the win at 6-7. Sunday 6 July began with the UK’s first ever Segway beach polo match as spectators gathered on the beach for a second day of high-speed showdowns in the arena.

Three riders from Cornwall Farmers’ Patch & Acre saddled up for a relay race against three professional polo players. Cornwall Farmers were quickest around the course to claim victory.

In a dramatic move Tim Vaux scored a victory goal seconds before the final hooter blew, with Cornwall winning the Carrs Land Rover trophy by 5 goals to 4 to the delight of the crowd. Besides the polo, visitors could enjoy delicious food and drink from the Veuve Clicquot Airstream and Champagne Bar and the The Beach Hut barbecue. Pop-up shops, Segway taster sessions from Cornwall Segway and an off road Land Rover experience took to the sand whilst Joules welly-wanging raised £700 in aid of Help for Heroes.

On Saturday evening, up and coming DJ duo ‘Billon’, hand-picked by Tinie Tempah, entertained crowds on the beach.

Watergate Bay Hotel’s Will Ashworth spoke of the event’s success: “This is our eighth year of hosting Polo on the Beach, and we continue to attract a record number of spectators with an estimated 10,000 people joining us this year.

“It’s fantastic to organise an event which captures the imagination of locals and visitors from further afield.”