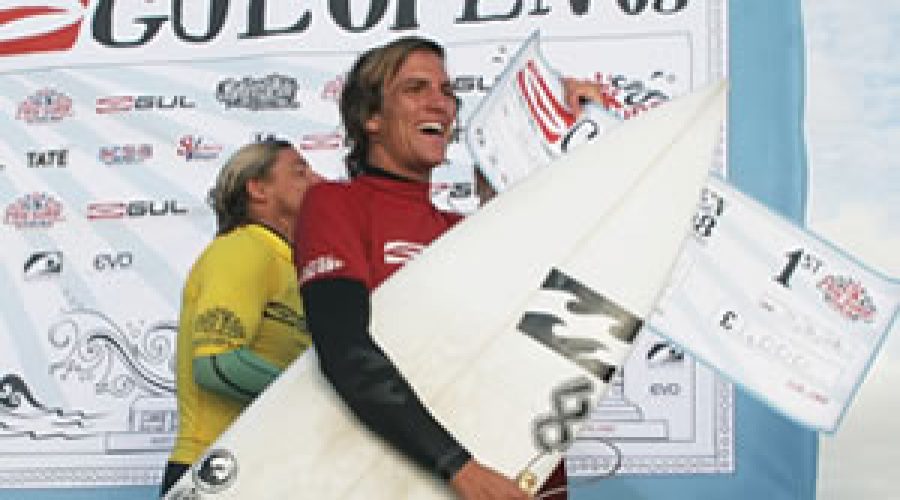 Reubyn Ash won this years Gul Open Summer Series surf event against some of the best surfers in the UK. Reubyn dominated the fourth event on the UK Pro Surf Tour, winning all his heats to progress to the final.

In what was considered by most of the spectators the best Pro Tour Surf final this year, Reubyn put on an amazing display of contemporary radical surfing, taking to the air and completing several air reverse manoeuvres. Second place also went to one of the young guns, local favourite Jayce Robinson from St Ives, whose recovery from the broken leg injury he sustained earlier in the year has been remarkable. Third place went to Alan Stokes (Newquay), who now stretches his lead over the rest of the field at the top or the UK Pro Surf Tour ratings. Fourth went to Johnny Fryer, his second fourth place finish on the tour this year.

In the Women’s division Nicole Morgan (Ireland) again put on a show that highlighted how far women’s surfing is progressing in the UK and Ireland. However at this event she did not have it all her own way Lauren Ringer (Aus) now based in St Ives pushed her all the way, but eventually finished second. Third went to Zoe Sheath (Isle of Wight), who also won the Under 16 Girls Division, her fourth win in that category of the season. Fourth place was Sophie Hellyer (Westward Ho) making her first UK Pro Surf final.

The Under 12 Open was won by nine years old rising star Will Bailey (Woolacombe), hotly tipped to become one of the next surfing sensations in the UK. This was the first UKPST event Will has entered and to defeat the best surfers in that age group, some of whom are two or three years older than him has been a remarkable achievement.

In the Under 16 Boys Josh Piper (Newquay) made it two events in a row to take out the category consolidating his position at the top of the Under 16 Ratings.

As mentioned previously Zoe Sheath (IOW) won her fourth event in a row in the Under 16 Girls category. In doing so takes her to an unassailable lead in the ratings, as four events out of the six count to decide the winner. Zoe is now the 2008 Under 16 Girls champion with two events remaining.

In true form for one of the most naturally talented surfers in the UK, Reubyn Ash also won the Relentless Money Move for the most progressive manoeuvre of the contest. Pulling off an amazing air reverse in the final. In doing so pocketing the £250 prize, this is his second Relentless Money Move win of the tour this year.

Event Director Dave Reed commented: “Despite the marginal surf conditions throughout the majority of the event we have seen some fantastic surfing.” He added: “The tour provides professional events that encourage surfers to compete in whatever conditions they are faced with. Some events could be one to two feet, others could be six to eight feet, a true champion is the surfer who can excel in all sizes of surf and all types of waves.”S

am Franklin from Gul commented: “It was a great competition despite the conditions. The level of talent on the tour definitely shone through emphasizing the need for continuing support of UK professional surfing."