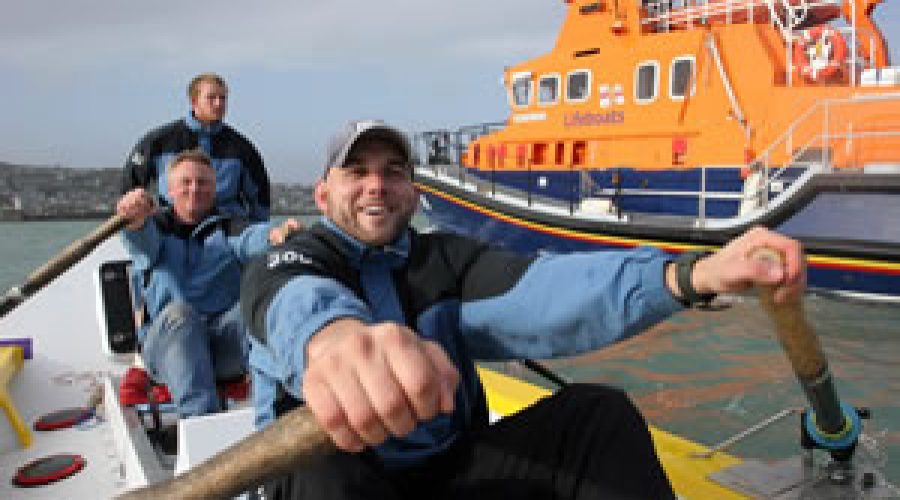 A team of rowers from the Isles of Scilly have officially launched their campaign to break the world record for a transatlantic crossing.

The four-man team gathered at the Penlee RNLI lifeboat station ahead of their attempt to beat the record for crossing the Atlantic from New York to the Bishop Rock Lighthouse.

Five people are training for the row, though only four will make the journey, which starts in June. The team members are Chris Jenkins and Wayne Davey who are RNLI crew volunteers on the St Mary’s and Penlee lifeboats respectively, Paul Osbourne, Tim Garratt and Joby Newton.

The route means they will be ‘rowing for home’ and their challenge is to beat the existing record of 55 days and 13 hours.

The team are busy following a tough fitness regime, but recently they’ve had to manage without their 29-foot boat, which has been on the mainland for essential work.

Chris Jenkins says he can’t wait for the chance to get some real rowing practise in again. “We had to send the boat away for a foot steering system to be fitted and for the completion of the vital water making plant that we need to have onboard.

“We need to get her back to the Isles of Scilly so we can really start practising before she leaves us again to be shipped off to New York for the start of the race on the first of June.”

The team are sponsored by Tresco Estate which has provided the purpose built boat.

The rowers will be raising funds for four charities – the RNLI’s Train Sne, Save Many crew training appeal, the Cornwall Air Ambulance Trust, Above and Beyond – Enhancing Bristol’s Special Care Baby Unit and Breakthrough Breast Cancer.

To find out more about the team who are rowing for home this summer, visit www.row4home.com