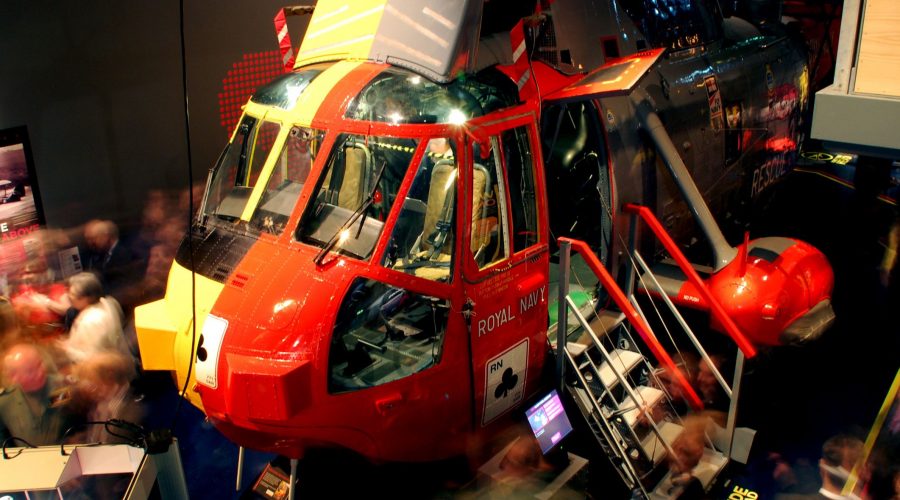 Seek Out the Search & Rescue Exhibition If you have time this Easter it would be worth a trip to the National Maritime Museum Cornwall in Falmouth for their impressive new show Search and Rescue.
Honouring the work of the heroic men and women who risk their lives at sea and around our coast, the new exhibition, the first of its kind, invites you to be a part of their world, where ordinary people lead extraordinary lives.
As you enter the exhibition you discover you have walked into a central hub for all Search and Rescue operations. A Sea King helicopter dominates your eye line inviting you to climb aboard; to the right an RNLI Atlantic 75 inshore lifeboat rides high above you; in front the interactive Coastguard Operations room asks you to respond to a Mayday while a cliff rescue team descends a wall above you.
Spend some time on the ‘beach’ astride the quad bike and keep the surfers and swimmers safe, relive childhood dreams by dressing up in flight suits, helicopter helmets, RNLI and coastguard clothing and lifesaving equipment. Be entranced by the film footage and audio descriptions of rescues well-known and some untold and take a step back in time to the founding years of the lifesaving charity the RNLI and the Coastguard.
All around you are major objects, artefacts, personal effects, photography and film footage from the past and present sharing the lives of those who come to the rescue when we’re in trouble at sea. Clothing and equipment from the past including rocket lines, horse and cart wagons, wicker helmets and cork lifejackets clearly communicate advances in today’s technology and the impact it now has on numbers of lives saved.
The exhibition shows that although decades have passed, the grit and determination of individuals, who are in some cases volunteers, to risk their lives to save others has not changed. The drive then was as passionate as it is today, time does not stand in the way of human perseverance and dedication.
This couldn’t be more evident than when revisiting Cornish rescues from the past. The exhibition looks at the wreck of the Suevic in 1907, the largest rescue operation in the RNLI’s history, saving 524 lives and at the 1981 Penlee disaster when 16 lives were lost including the volunteer RNLI crew from the Solomon Browne and passengers and crew from aboard the Union Star.
The Fastnet disaster on 14 August 1979 saw an emergency response from official coastguards and civilian naval vessels, lifeboats and helicopters and was the largest rescue operation at sea since World War II.
Within the exhibition, film footage and accounts from rescues at sea and land, including the Boscastle flooding, highlight the approach to the mammoth rescue effort and the co-ordinated work of all the maritime rescue services.
Joanna Bellis, RNLI Heritage Curatorial Manager says: “This is the first time the RNLI and RNLI Heritage Trust has worked as a partner with a national museum for an exhibition and this is the most significant ‘presence’ we, as a charity, have had in the West Country. We’re delighted to be part of it and to be able to present our heritage collections alongside items from the modern day RNLI. We hope our contribution to the exhibition will be a fun and inspiring way to find out about the charity and will go some way to giving back to all those that have supported us over the years by showing what their support and funding has enabled us to achieve.”
Search and Rescue, the new blockbuster exhibition from National Maritime Museum Cornwall in Falmouth is now open and invites you to enter the world of the maritime rescue services. Experience the drama of a rescue, climb aboard a Sea King helicopter, meet the crews, explore a lifeboat, revisit rescues from the past and discover what it takes to bring you home safely when the worst happens at sea and around our coast.
See website for details: www.nmmc.co.uk