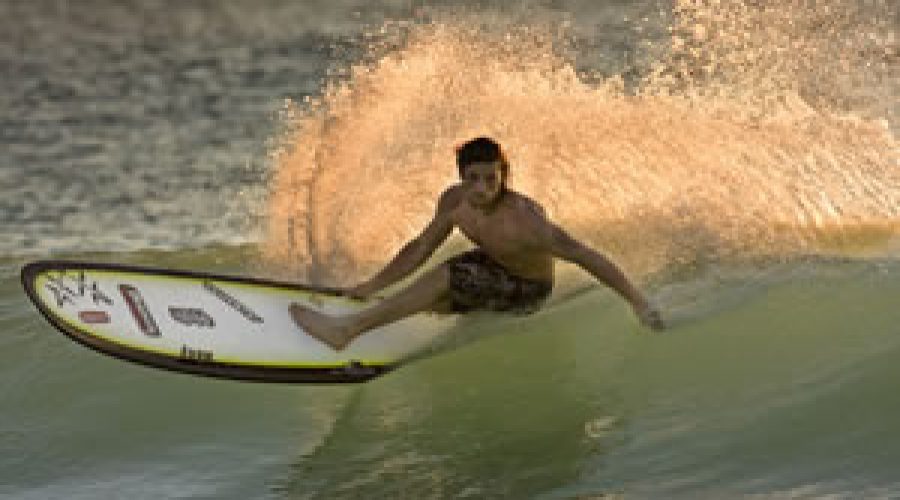 Skinner is Big in Japan Top Cornish surfer Ben Skinner has returned home from Japan with a second world No. 2 title and the bonus of potential export business for the new boards, designed by himself, that secured his latest triumph.

Newquay-based Ben, 23, finished second in the Pro Longboard Classic at Taito Chiba, part of the ASP (Association of Surfing Professionals) Longboard WQS Tour. It is believed to be the highest result ever achieved by a British surfer in an ASP event outside Europe.

Fellow Newquay surfer Adam Griffith finished 17th, which Ben described as “an amazing result for a 20-year-old competing in a pressure-cooker atmosphere against the world’s top surfers.”

Both were using the new Skindog boards made by the recently launched Newquay company Adams Surfboards Ltd, where Ben is designer along with Matt Adams (shaper) and Jason Gray (glasser).

As a result of his latest triumph, Ben is now in talks with two Japanese-based distributors with a view to opening up sales potential for the Skindogs in the Far East.

“The whole experience was just phenomenal,” he said.   “There were 96 competitors and I had the last seed because I was a late entry, otherwise I would have been fourth seed.

“Many of the competitors were surfers I had grown up hero-worshipping, including Kevin Connelly of the United States in the final, and to have so much interest in our new boards was just the icing on the cake.  Everywhere we went, people wanted to take the boards off us and have a look at them.”

He added:  “Nowhere is bigger in the world surfing industry than Japan, but no British company has really made the most of it yet.  To have so much interest in our own Cornish-made products opens up huge possibilities for top quality exports from Cornwall!”

Ben used the very first Skindog board ever made – just five months ago – for all seven heats at Taito Chiba, including the final.  Now he has set his sights on the next ASP Longboard WQS Tour event – at Huntington Beach, California, from July 18-27.

That would be a return to his spectacular arrival on the global stage two years ago when he took silver in the 2006 World Surfing Games – also a feat never previously accomplished by a British surfer.

For his Japanese second place, he received a glass trophy and a thousand US dollars – “which just about covered my air fare out there!”

But he added:  “Obviously it was all well worth it.  Just to be competing in the heats against the stars I have been watching all my life was terrific, and then to make it all the way into the final against Kevin was really something else.

“They call him Kevin ‘Magic Feet’ Connelly and he really was brilliant with his feet – an incredible surfer.

“Bonga Perkins, of Hawaii, and myself had consistently got the highest scores in the heats throughout the contest, but for the final the waves were small, which favoured Kevin as I need a bit more power to get going.

“I was waiting and waiting – a good 15 minutes – for the bigger wave to come in. I was going to beat him by surfing differently and doing turns, but it wasn’t to be. I’m just really happy to have made it to Japan and reached my first ASP world final.”