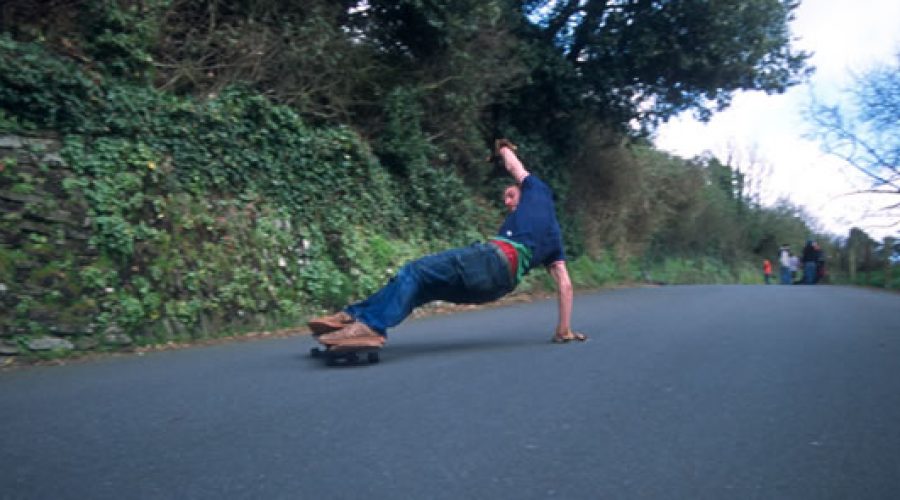 Pioneers of a sliding renaissance, Faltown's cutting edge style has freewheeled Cornwall into the center of the global skating culture. “You have to see how close you can get your cheek to the road,” Benny told me at the bottom of the hill he had just come screeching down face first. “That’s what we call a Surrender Slide”. In fact many of the concrete-shaving slides the skaters were effortlessly demonstrating have been invented and named on the very hill where we were standing – Castle Drive, Falmouth. People the world over are putting down their shortboards to try sliding, and moves created at ‘The Castle’ are being practiced stateside and beyond.

Five years ago sliding wasn’t cool, and little was known of its invention back in the 60s in Berkley, USA. But since its re-invention here in Cornwall, its ambassador Cliff Coleman, and sliders around the globe, are hailing the Faltown crew as heroes of the sport. “Without wanting to blow our own trumpet if somewhere in the world had to be named for the renaissance of sliding it would be Falmouth”, grins Alex Brinnen, one half of the duo behind the Faltown Skateboards brand.

If you’ve missed the news of the sliding revolution, it’s a skating style that lies in squatting so low on your board that you can heel your feet over and get your hands on the tarmac. Add the magic ingredients of hard wheels and gloves with plastic palm protectors and you will find yourself sliding. “It’s a die-hard, practical way of skating. It’s fast and dynamic, yet stable and controllable”, explained Alex, “and there’s nothing better than pulling off a classic Coleman slide on butter smooth hills.”

Insane hills
Originally invented by Coleman, the move emanated from the need for brakes to skate Berkley’s insanely steep hills. Which is why sliding suits Cornwall’s topography down to a tee. “The nature of the hills here is often steep and narrow, so sliding is the only way you can skate them”, Alex adds.

Whilst Cornwall has been home to a thriving downhill skating scene for the last decade, as bombing got steeper and faster, sliding was a natural stepping stone for adrenalin-seeking skaters. Faltown team member Dom Lilly found that, “its appeal was the freedom of being able to go down any hill. Sliding encourages you to go faster and faster and if there are any problems you can just slide out to stop.” Taking the slide and pushing its limits to develop an innovative style, the Faltown crew led the art of downhill skating to new experimental boundaries.

“Back when we first started out it was an open field,” remembers Mark Short, Faltown team member and creator of many of the slides. “360’s hadn’t been done as far as we knew, so we started doing Coleman slides and passing the pendulum point by grabbing the nose, pulling it and kicking it around.” Many skaters use the art of going sideways to crossover into other sports such as surfing and snowboarding. “Surfers will love it. When I got into sliding it was like the missing link to my surfing”, said Alex.

Global spotlight
On a mission to find the perfect hills for sliding, the Faltown crew toured Cornwall for the ultimate combination of steep and twisty. Their favourite haunts include ‘The Ferryboat’ passage leaning into the banks of the Helford River, the insane ‘Maenporth Hill’ that doesn’t let up for the duration of its 1:4 gradient, and a gnarly right-hander further west in Porthcurno. But it was the quiet slip road leading to Pendennis Castle that was an obvious starting point, and this is where the Faltown crew met, progressed and still get together for their Sunday slide ritual. And it was from the early days on the slopes of the Castle, that these guys set off an avalanche of events that snowballed from a local hotspot into the worldwide skating arena.

“It was a string of coincidences that brought everyone together”, explained Mark. “We all came from different backgrounds and different types of skating. But we were all in the same place, following the same kind of thread.” Alex met Chris Humphris at Falmouth College of Arts in 2002, then they got together with local downhill skaters Dom and Mark and started to copy the slides illustrated on a Coleman pair of wheels. “None of our boards were suitable,” Chris explained, “so I got some 12mm birch ply, cut it out like a surfboard and sprayed it”. The early prototypes were ‘crap’ according to Chris, but from trial and error the perfect slide board was born under the Faltown label. Now advocated and ridden by the legend Cliff Coleman himself, the boards’ spoon rails, variable camber, double-kick and hard wheels are the spot-on recipe to ride the slides.

By 2003 the Faltown boys were being noticed about town when their footage (also aired on the Extreme Channel) was played at Remedies nightclub. Not only did people desert the dance floor to watch their spectacular moves, but when the video was posted up on their website it received over 60,000 hits from around the world in the first month. “It was around this time that we started to realise we were really onto something. Sliding had a history, and we were just dipping our toes into its future”, Mark recalls.

Skating superstars
It was a trip to an event in Sheffield, in the vain hope of spotting their God Cliff Coleman, that the Faltown crew embarked on a fast-track journey to the global spotlight. Soon realising that their moves were far more advanced than those of other sliders they met, “we ended up feeling a bit like superstars, even though our technique was still very limited”, Mark remembers. And although they might have dreamed about getting chummy with a skateboard legend, it came as a big shock when Coleman saw them slide and left them with an open invitation to visit his home in the USA.

So it was in Berkley Hills – the home of sliding – that four of the Faltown greats found themselves bombing down smooth runs up to five-and-a-half miles long, at speeds up to 60mph. “It was quite a humbling experience”, declared Alex. “The guy who invented the sport was introducing us to the original heroes of sliding as ‘some of the best skateboarders in the world’. Pulling out moves that had never been seen on the other side of the Atlantic, the boys amassed huge respect by skating hair-raising runs that had been bottled by all but the Brazilian sliding guru Sergio Yuppie.

It wasn’t long before Cliff Coleman and Sergio Yuppie arrived on Cornish turf, to support a slide jam held in Falmouth last summer – an event that confirmed Cornwall’s place at the heart of the sliding map. “The weekend got more people into sliding and made us realize how many people wanted to give it a go”, said Mark. As well as putting on a slide demo for the second year running at the Bude Downhill Classic, this year Faltown will be running an organised freeride event in partnership with the UK Gravity Sports Association. “It will be an all-weekend skating festival with music, downhill racing and a slide competition”, enthused Alex.

It’s fair to conclude that the Faltown crew has set the local and international sliding scene on a roll. Through their website they have permeated skating communities in America, Australia and all over Europe and sliding is now Brazil’s second biggest skating discipline. It’s become a worldwide phenomenon thanks, in part, to moves developed here in Cornwall. So lets not forget how the kings of the Cornish Castle played a very big part in its renaissance.