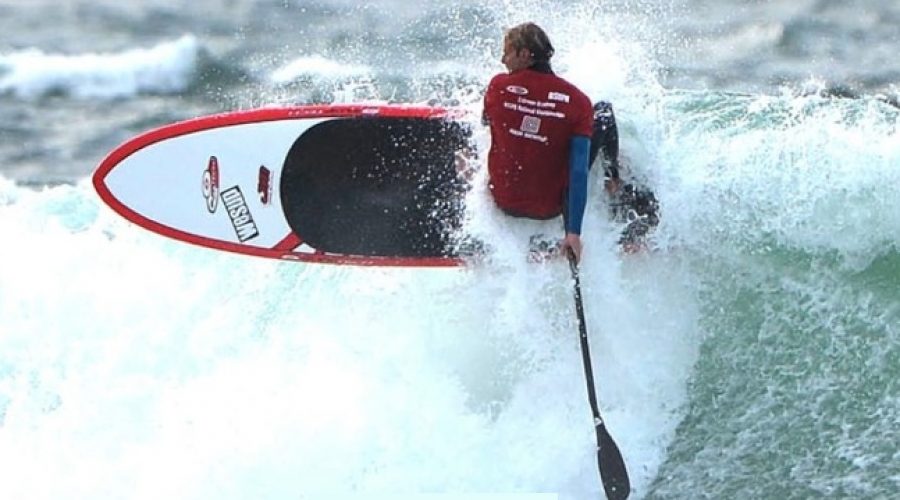 Stand Up Wave Champion to be Crowned

Watch out surfers! The ‘truckers’ of the waves are heading to Cornwall for the fifth British Stand Up Paddleboard Association (BSUPA) National Championships at Watergate Bay over the weekend of 4-6 October.

The contest will see Britain’s best stand up paddleboarders compete for the title of National Wave Champion at the event hosted by the Extreme Academy.

For those of you who have had your head stuck in the sand for the last several years, stand up paddling boarding – or SUP as it is otherwise known – is the art of riding a very large style of surfboard using a single bladed paddle to steer, turn and propel themselves through the water and onto waves.

BSUPA event director Richard Marsh said: “There’s a very good buzz about this event because it’s the only SUP wave event in the country. Last year we had 55 entries and with the conditions as challenging as they were, it was quite tense whether we’d actually finish in time. Soley focusing on the wave element of SUPing will give us more flexibility.

“This year’s competition is wide open. Whilst there are names we know, there’s a very strong chance that someone unknown could tear apart the fleet and take the championship. It will definitely be quite a show for spectators.”

The national championships will comprise of four categories: open men, open women, U16 youth boys and U16 youth girls.

With autumn swells predicted to hit the Cornish coast, conditions could see waves of up to 6ft. Competitors will be judged on their style and how they ride the waves much like a surfing competition.

Watergate Bay Hotel’s Will Ashworth said: “It is amazing to see how SUPing has grown over the last few years. We’ve certainly noticed a bigger interest in the sport at the Extreme Academy.

Locals Adam Zervas and Dom Moore – who won the Legend of the Bay competition back in May – have been out in the bay a lot, so I would definitely think they were strong contenders for the title.”

Organisers are hoping to hold additional expression sessions and a team SUP challenge as well as presenting the annual Watergate Bay Waterman award.

Richard Marsh continues: “The growth of this competition is testament to the Extreme Academy who have had faith in us to deliver this from a very grassroots event when we started five years ago, to the national championship it is today.”

See some awesome images from an earlier BSUPA event in this video: