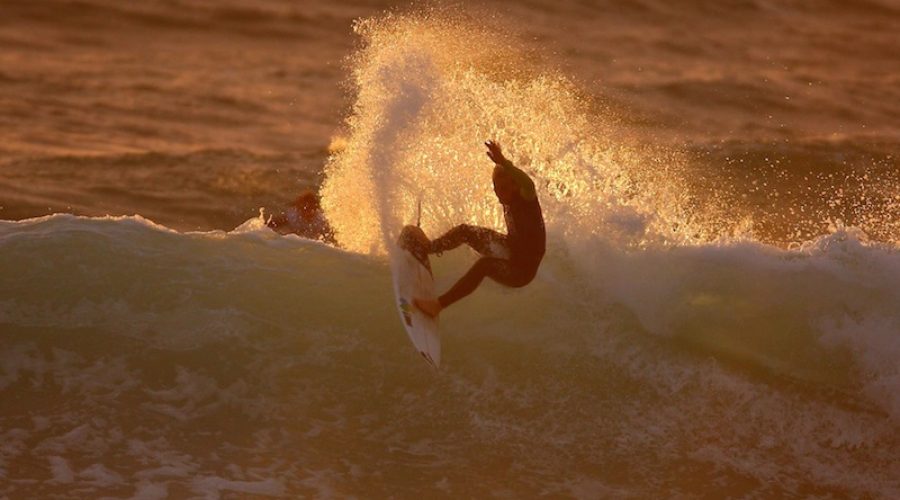 Newquay surfer Alan Stokes emerged as champion at the Night Surf event at Fistral Beach over the weekend of 14-15 June, following an incredible two days of inspiring surfing in tough conditions at this truly unique surfing competition.

Stokesy must really like surfing at dusk because this is the fifth time he has taken the title at the Night Surf contest, which is the only event of its kind in Europe and always popular for both surfers and spectators.

Dave Reed, founder of the UK Pro Surfing Tour, worked with Newquay Business Improvement (BID) and a number of local sponsors to make this much-loved event a certainty.

As the final night of the Night Surf came to a close he said: “We knew the Night Surf had again been a huge success, despite the mixed weather and storm surf conditions the level of surfing reached new heights. Thanks to the valued input of the BID and our sponsors, who included Fistral Beach Bar, P20 Once a day Sun Protection, Smirnoff, Snugg Wet Suits, Adams Surfboards, Shoreshot Images. Thousands of spectators watched the elite of British surfers and a number of International surf stars raise the bar in this unique and very exciting contest.”

Alan Stokes commented: “Winning the Newquay Night Surf for the 5th time is an amazing experience. This is my home wave so it means even more to me. It was a tough one to take however. Everyone was on it with sure solid surf and there was inspirational surfing from all the crew. You can’t beat the atmosphere or the uniqueness of the Newquay Night Surf so I’m just totally delighted to have taken this honour.”

The finals of the P20 Once a Day Sun protection Pro Junior saw Gordon Fontaine’s younger brother Ian put on a master-class of surfing. Ian defeated an on form Luke Dillon from Newquay who in the final performed one of the best backhand re-entries of the event but could not catch up with Ian. Third and fourth went to Newquay surfers Ben Bennett and Dale Foster.

The Adams Surfboards Under 18 Boys was won by Ed Smith from Liskeard, his first win on the UK Pro Surf Tour showing he will be a major talent of the future. Second went to St Ives’ Simon Trebicock. Third place was earned by Croyde ripper Will Bailey and fourth was picked-up by Lanzarote surfer Josh Braddock who led earlier in the heat but unfortunately snapped his board half way through the final.

The Snugg Under 18 Girls was held in challenging conditions but taming the ocean and winning was Woolacombe’s Lucy Campbell with Georgia Timson from Newquay coming second. Third place went to Welsh surfer Newport’s Emily Williams and fourth to Newquay’s Jaide Lowe

The Star of the Shoreshot Under 12 Open was once again Stanley Morgan from Bude winning his second event on the tour this year. Runner up, with his highest place finish so far was Jordan Zervas from Newquay. Third place went to local surfer Fin Collins and the fourth spot to Joseph Morris from Wales

The traditional Night Surf Fireworks graced the sky once the contest was over and both surfers and spectators enjoyed the night air at Fistral Beach.

Newquay BID Manager Eve Wooldridge said, “This has been another great year for the Newquay Night Surf which is one of the most popular and inspiration contests with its unique floodlit format. The Night Surf attracts all the top UK surfers making it an extremely core event for the UK Pro Surf Tour and we’re delighted to have helped ensue the future viability of it with our support this year.”