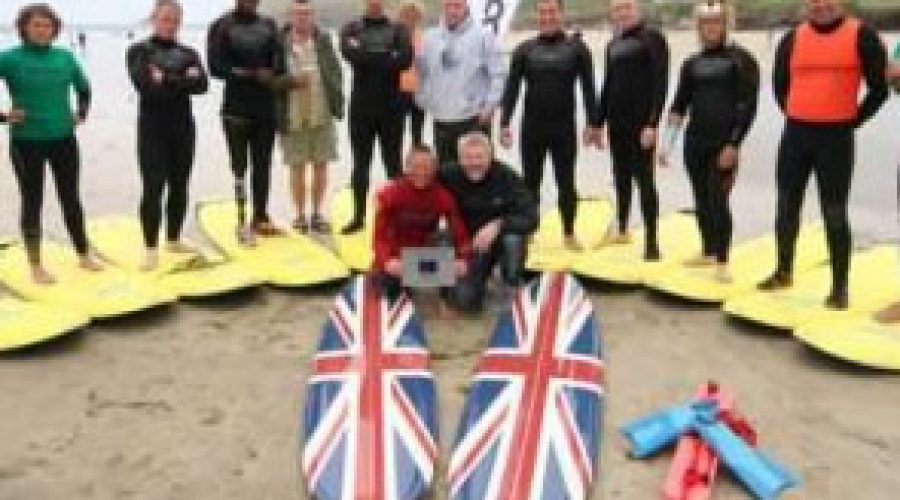 Surf Action CIC is one of only 10 projects to make it through in the Best Health Project category in The National Lottery Awards, the annual search to find the UK’s favourite Lottery-funded projects.

Surf Action CIC works with service personnel returning from active service from all conflicts, providing special therapeutic sessions to help them get back to community life. By using the physical activity of surfing, the volunteers and instructors help the soldiers to regain their confidence and develop positive everyday skills.

Semi-finalists have been shortlisted for the big difference they have made with Lottery money, and people in Penzance and across Cornwall are being urged to cast a vote, from Tuesday 31 May, to help them make it through to the final.

There are seven categories in the Awards each reflecting the main areas of Lottery funding: arts, sport, heritage, health, environment, education (in association with Best magazine) and voluntary/charity. The winning project in each of the categories will receive national recognition at a star-studded event later this year, broadcast on BBC One, as well as a £2,000 cash prize to spend on their project.

Russ Pierre, Director of Surf Action, said: “We are absolutely thrilled to have reached the semi-finals of The National Lottery Awards. Lottery money enabled Surf Action to buy new wetsuits and beginner and specialist boards to be used at our surf camps for soldiers returning from active service. It’s easy to vote, so we’re hoping people support us, as it would be a fantastic reward for those involved in the project to receive national recognition for their hard work.”

This year’s National Lottery Awards are supported by Lottery Draw Show presenter Jenni Falconer. She said: “I love The National Lottery Awards because they really pay tribute to all the unsung heroes, selfless volunteers and dedicated workers across the UK who are using Lottery funding to make a real difference to local people, places and communities.

“Now it’s your chance to have your say and vote for your favourite. Please get behind your local project and vote to get them through to the final – every vote counts!”

Voting for the semi-finals starts at 9am on Tuesday 31 May and ends at midday on Monday 20 June. To vote for Surf Action CIC call 0844 836 9705 or log on to www.lotterygoodcauses.org.uk/awards. Please do not call before lines open as your vote will not be counted but you will be charged for the call.

The three projects in each category with the highest number of votes will go through to the final round of public voting later this summer.