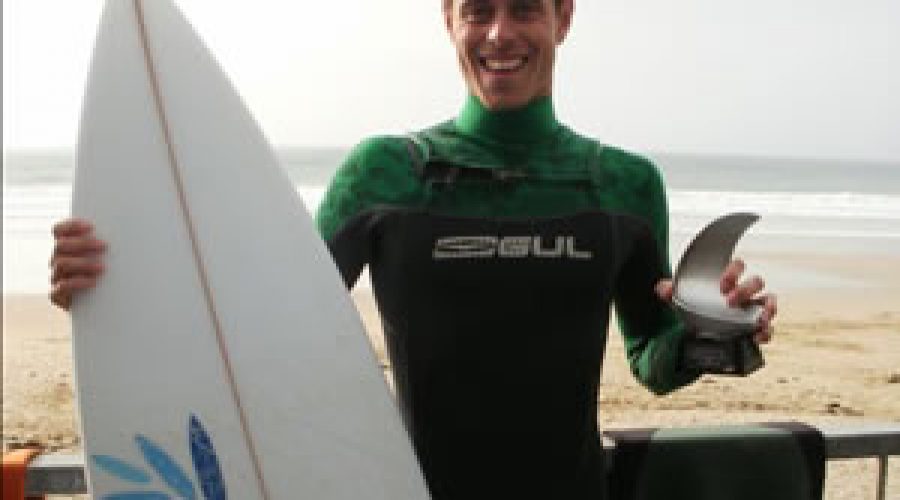 Newquay Surfer Tom Butler reclaimed the title of England’s best surfer when he added a second English National Championships win to his growing list of accomplishments.

In monstrous surf which saw the contest moved from Watergate Bay to Tolcarne Beach in Newquay, the talented local surfer surged ahead of competitors to win the Open division of the competition. Adam Griffiths, who is also based in Cornwall, was victorious in the Longboard contest.

Despite the venue change, large close out waves were still order of the day and this still demanded that surfers had to ensure their wave selection was on form to enable themselves the opportunity to get the big manoeuvres which are then transformed into big points.

First of the finals were the Longboarders and it was Newquay’s Adam Griffiths who paddled into a wave that took him right across the beach and points to match, with a good scoring back up wave which pushed him ahead of the other three finalists. Reigning Champion Ben Skinner gave chase but even with a late charge in the dying moments of the heat he failed to overhaul Adam who claimed the deserved win.

The Ladies final was initially controlled by Woolacombe’s Lucy Campbell, but her early dominance wained as Anne Cecile and Hannah Harding began to exchange wave for wave but it was Anne Cecile’s stronger and more powerful surfing that won the day.

All eyes were now on the Open Final. Large waves with workable open faces rewarded the judges and spectators alike with spectacular surfing. Strong surfing with progressive manoeuvres were in abundance and even being claimed by the competitors. Gordon Fontaine surfing solidly throughout the day posted two six point rides but it was Tom Butler who on his back up wave pulled off three big turns and gave him the unassailable lead with two seven point rides. The heat drew to a close giving Tom his second English Champion title.