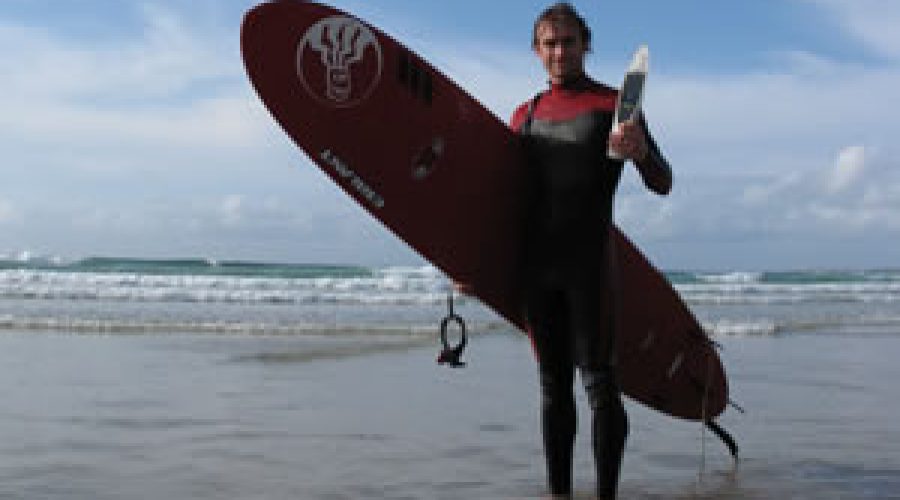 Newquay surfer Chris Thomson has been celebrating this week after his global surf holiday enterprise, Errant (www.errantsurf.com), earned him the title of ‘Young Business Person of the Year’ in the 2009 Cornwall Business Awards.  Twenty seven year old Chris has been running Errant, which evolved from its sister company 121 Surf Coach, since 2001 and over the years has built it from scratch to a successful six figure earner.

Originally from the Isle of Wight, Chris travelled the world from a young age as a professional longboarder and surf instructor. Around 2005 began to notice that surfing was growing as a trendy sport and that its perception as a zeitgeist activity was being picked up on by the media.  With his surf instructor job giving him an insight into the mindset of a new breed of ‘lifestyle surfer’ Chris could see that thousands of cash rich/time poor people were keen to start and develop their surfing skills.  However as a travelling surfer he was also aware of massive inconsistencies in the level of professionalism amongst surf operations across the world.  He therefore identified a gap in the market for a quality tour operator and set up Errant to fill this.

Errant is based on similar proven models providing activity holidays such as sailing and skiing and now provides a range of bespoke surfing packages in Cornwall and overseas for families, couples and sole travellers.  From its base in Newquay, Errant sells now holidays to locations as far flung as the Mentawai Islands, Barbados, Bali and Costa Rica.  Chris has also set-up and developed the Errant Surf School, newly based in Newquay’s Island Crescent, and spent last year living and working in Spain, creating the Errant Surf Camp, La Hosteria in Cantabria in the North of the country.

Chris says he is completely honoured to win the award, particularly given the stiff competition he was up against.  When asked what he thinks it has taken to start and grow such a successful company at such a young age he says, “I believe that I have been continually motivated to create an amazing company and that I am a hard working opportunist.  I left school with few qualifications but I have not allowed this to stop me. I believe that my passion for the industry and for providing the very best holiday experience possible is what sets Errant apart.  I’m fascinated by people and by new trends and interests so am constantly evolving new Errant propositions to meet this and refuse to ever say ‘that’ll do.’  We can always improve what we do in some way and I believe that it is my commitment to quality and to providing something fresher than anyone else that has got us where we currently are.  And there’s a lot more to come!”

Chris also has a personal new joint venture following the birth of twins with his wife Theresa.  Due one of the twins being unwell, Chris was unfortunately unable to attend the prestigious awards ceremony at the St Mellion Golf Club, but he caught up with his award over the weekend and fittingly, took it for a surf!