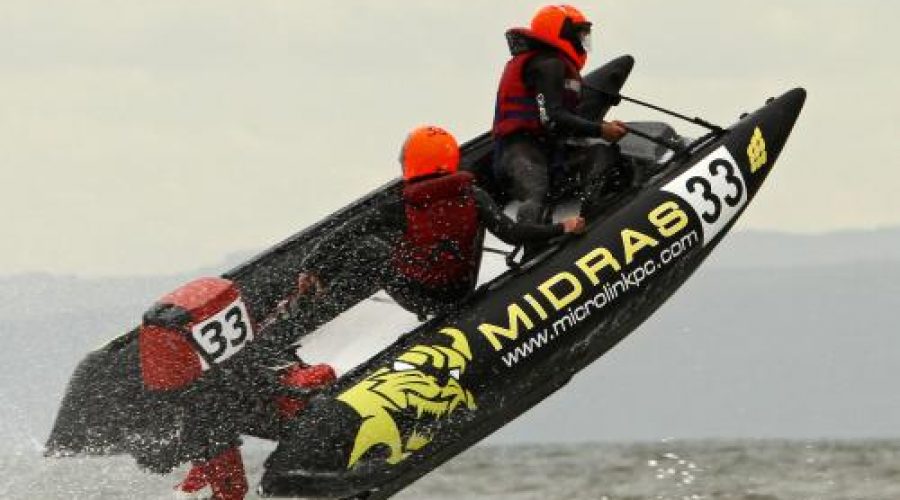 The UK’s best surf powerboat racers will descend on Watergate Bay in Cornwall for the Thundercat 2013 National Championships this weekend.

The Extreme Academy at Watergate Bay is set to host the 7th and 8th rounds of the competition over the weekend of Friday 28 – Sunday 30 June 2013.

Powered by 50hp outboard engines, Thundercats are four-metre-long inflatable catamarans, which are capable of reaching speeds of up to 60mph.

Each boat is crewed by two people: a driver to steer and a co-pilot to stabilise the boat and achieve the greatest speed possible around the M-shaped course.

With the course just 10 metres from the shoreline, spectators are able to get close up to the action.

Will Ashworth of Watergate Bay Hotel said: “This is the second time we’ve hosted the Thundercat National Championships and we’re delighted to be involved in such a unique event again.

“The sport is really different from anything else we host at Watergate Bay. The races are adrenaline-filled and it’s a lot of fun to watch, so it’ll make a great warm up for the World Championships later this year.”

The June event will see teams earn points across heats throughout the weekend with the chance to earn double points in the final round on Sunday.

Competitors are able to enter one of two categories. The “Pro Stock” category is for the advanced racers, who are allowed to enhance and modify their engines to increase their maximum speed. Beginners are encouraged to enter the “Stock” category where only minor modifications may be made.

As well as earning vital points in the National Championships, many crews will be using the two-day event as preparation for the World Championships which are to be held at Watergate Bay and Pentewan Sands over the weekend of 11 – 13 October 2013.

Fiona Pascoe, Head of ThunderCat Racing UK said: “The reception we have received in Cornwall has been absolutely fantastic. It’s about getting bigger and better, hence my decision to host the prestigious World Championship in Cornwall.”