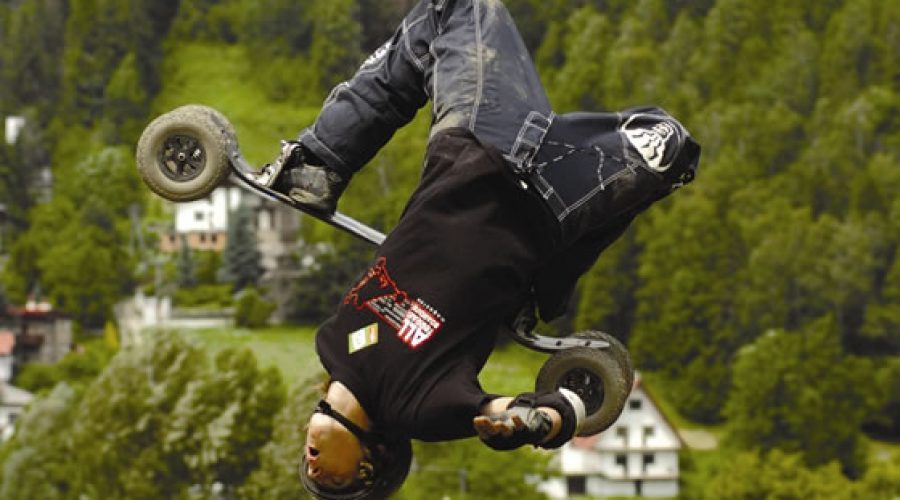 He’s the world’s best mountain boarder, been top his game for three years and is still only 19-years-old. We chat to Cornwall’s very own Tom Kirkman about his phenomenal success. AC: How did you get into mountain boarding?
TK: When I was 13 my dad and I started a small skateboard shop. Actually, it was more like a youth club than a shop! After about a year of being open we stocked a mountain board in the shop. I tried it once and have been riding ever since.

AC: What was it like to win the Maxtrack Classic, your first ever comp in 2005?
TK: Having only ridden a mountain board for a month, then doing so well in my first ever comp was great. Happy memories…

AC: How did you feel to be crowned world champion at such a young age?
TK: That was cool. I remember being really young at my first World Championship and telling Leon Robins, the then reigning World Champion, that I would beat him the following year. When it actually happened I was so chuffed, you can’t describe the feeling.

AC: Where are you from, and where do you live?
TK: I’m from England but my mum is Dutch, so I’ve also spent a lot of time over there, and think of myself as a bit of both. I’ve lived in Calstock in Cornwall for my whole life; not that I’m there much anymore.

AC: How has Cornwall influenced your career and contributed to your success?
TK: I grew up (and still live) in a little cottage in the middle of the woods and spent most of my childhood climbing trees and going on adventures. I think that made me pretty fearless from a young age. Cornwall is also such a beautiful rural county, with so many outdoor sports going on that it’s got to rub off on you a bit.

AC: What makes you one of the world’s top mountain boarders?
TK: Self belief is probably the main one. When I’m about to hit a jump I know I’m going to land whatever I’m trying. It’s as simple as that!

AC: Who are your heroes or inspirations in or away from the sport?
TK: In my sport it has got to be Leon Robins, the man that invented style; AJ Watkins, my team manager who spends all his time trying to help the sport grow, runs the most chilled mountain board centre in the UK and still rips on a board; and Alex Downie the best person to ride with, without a doubt.

Away from my sport the great Bob Dylan for inspiring me with music, my amazing parents because you don’t realise until you get a bit older how much they know, and also anyone that’s anti-pollution, anti-war, or even anti-micro scooters. Oh, and Tuai Lovejoy for being so sick.

AC: What’s on your IPod?
TK: I don’t have an IPod, but on my computer there is mainly acoustic music and stuff my mates and I have made on my little home studio. Brownie McGee and Sonie Terry are pretty good. I like anything that isn’t happy hardcore or mega heavy death music.

AC: How and where do you train for competitions?
TK: I could say a protein shake for breakfast followed by four hours at the gym, but I would be lying. I don’t really train as such; I just go out riding and having fun with my mates everyday.

AC: Do you do any other sports?
TK: Skateboarding on a halfpipe which is one of my favourites, surfing when I’m somewhere with good waves, and snowboarding when there is snow about. Anything involving a board really.

AC: Why is Cornwall so good for mountain boarding?
TK: Everyone’s relaxed, so you don’t get treated like a hooligan. There are hills, woods, and moorland everywhere. What more do you want? There’s even a park in my garden!

AC: Where’s your favourite place to ride in Cornwall?
TK: I couldn’t pick a single one out as there are so many places, but my house is good, and all the woods around mine are too.

AC: Where in the world is best for mountain boarding?
TK: For me it has to be the BMW bike park in Germany, with three of the best tracks in the world all interlinking together with a chair lift to the top. The Edge Mountain Board Centre in the UK has the best jump I’ve ever ridden, and a sweet track.

AC: Aside from the obvious (ATB, ramp etc) what three things would you take to a desert island?
TK: I would probably take a guitar, a boat and definitely a lady friend.

AC: Tell us about your ramp in your back garden – does it attract the attention of your neighbours?
TK: I don’t really have any neighbours as I’m in the woods! I’m hoping to organise a few events there.

AC: Which stunt or trick do you most like to perform?
TK: A corked melon 900 because I’ve only been doing them for a while, which makes it feel twice as nice when you land it clean.

AC: You are known to invent and enhance tricks – which are you most proud of?
TK: The shifty shifty 360 is a favourite of mine, but it’s got to be the front side rodeo palm air.

AC:  What’s the highest air you’ve ever caught?
TK: On the jump at The Edge we were doing 720s at least 17ft off the top of a 10ft high table, and travelling up to 45ft in length.

ATB for the Masses

AC: How big is mountain boarding in Cornwall right now?
TK: It’s getting there. I see a lot more kids riding at all the local spots near me, but it’s still a growing sport. Ask me in a few years and hopefully ill be able to say it’s huge.

AC: What’s next for you in the world of ATB?
TK: To keep having fun and bring out the sickest mountain board video ever.  My two sponsors MBS and FatFace have just come together to get a mobile demo ramp sorted, which is really exciting as well be able to take our sport to the masses.

AC: What advice would you give to someone who wanted to get into mountain boarding?
TK: It really is easy, so get a board and give it a go.

AC: That’s easy for you to say! Thanks Tom. Good luck in the Worlds this year.

To find an ATB park near you, check out the Mountain Boarding listings in our Adventure Directory.