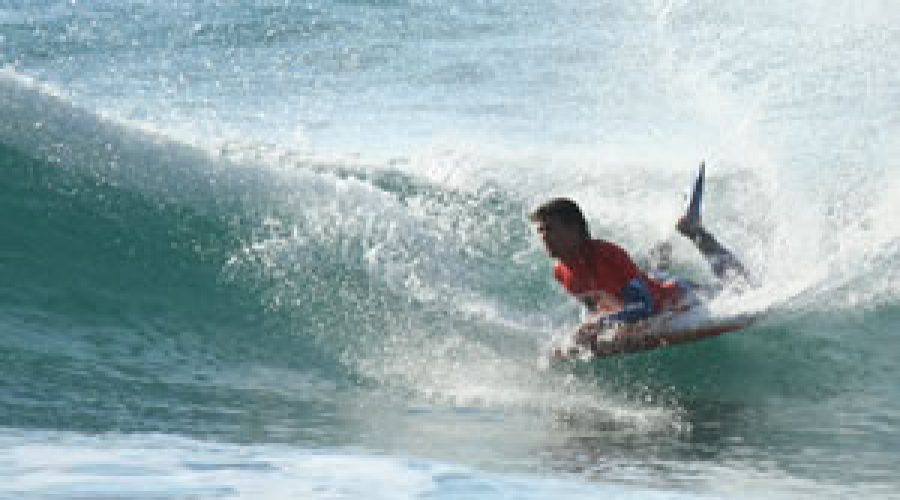 Blue skies, scorching sunshine and clean 2-3ft wedges greeted the best riders in the UK as they competed at Newquay’s Tolcarne Beach for the second stop on the 2011 British Bodyboard Club (BBC) tour.

In the semis, British senior champion Rob Barber and six-times British champion Damian Prisk led from experience and progressed to face current British champion Johns and last year’s wedge champion Winkworth in a final that brimmed with both talent and expectation.

Starting solidly with strong combos, Barber upped the benchmark with inverts, rolls and spins at his home break. As Porthtowan local Winkworth mixed a few little barrels with some boost sections on both lefts and rights, Prisk waited for the elusive wedge to work its magic.

As time ticked away, Johns found the right wave and sped with a silky trim line and whipped a full rotation air reverse off the bowl, projecting him into the flats as the crowd hooted and whistled just a few yards away on the beach.

As the hooter went the crowd made their appreciation heard and Johns made his way to the winner’s area to receive his prize of two new wetsuits from competition sponsor Agent Eighteen.

The result propels Johns into the lead on the 2011 BBC tour with 805 points, followed by U-18 British champion Steve Hall with 583, Dave Speller with 500, Barber with 430 and Remi Geffroy and Winkworth on 365 each.

The dropknee division was taken out by Ollie Medland, followed by Alex Winkworth in second and Aidan Salmon in third.

The first ever women’s division at the wedge competition was taken out by former Western Australia state champion Loz Williams, with Olivia Smedley coming in second.

In total £95 was also raised for professional US bodyboarder Eddie Solomon who is battling cancer. Dozens of bodyboarders paddled out and waited to turn and catch one wave together in to shore – commonly known as a party wave.

Local rider Barber, who finished a close second behind Johns, said: “The Bodyboard-Depot Wedge Air Show is the most action packed stop of the tour and this year it didn’t disappoint again! The event will go down as one of the best ever, we are stoked with the results, it has been a great day for British bodyboarding.”

All eyes are on the next stop on the tour -The Pit/NMD North Kernow Challenge – which is due to take place at Constantine Bay.