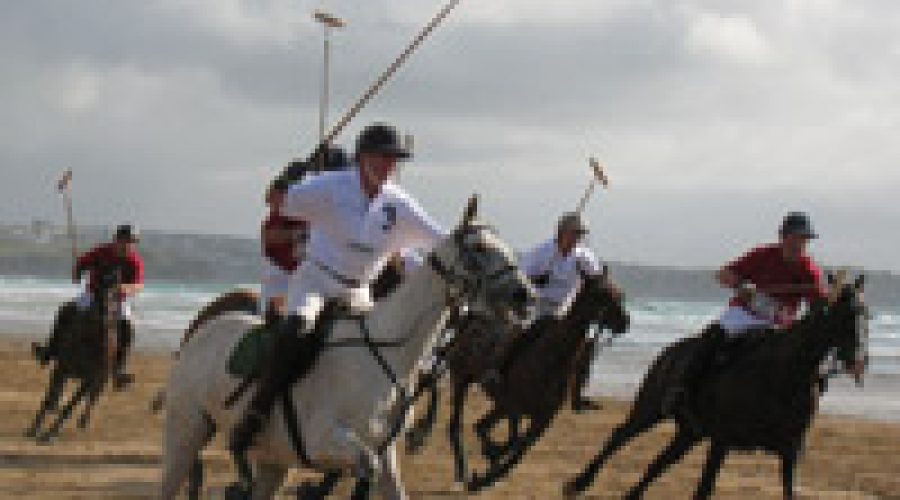 Despite strong winds and heavy rain earlier in the day, a large crowd turned out to witness the exhibition match played between members of Taunton Vale Polo Club. They were rewarded with an evening of glorious sunshine and action-filled polo in a stunning location.

“Overall the match was brilliant, it went really well,” said event organiser Paul Youngs of Clifton Polo Club. “It was great fun and the spectators seemed to really enjoy being so close to the action."

“Playing on the beach is completely different to grass polo. The ponies really enjoyed it – they can turn much quicker on sand than on grass, it’s more like riding a motorcycle. The ponies can really spin around, which makes the game much faster and pacier. Running the ponies into the surf was a bit scary as it was new to them, but once they had been into the water they were fine and loved it.”

The Grange of Exeter Aston Martin team of Phil Lemanski, Chris Andrews and event organiser Paul Youngs looked like they would run away with the match as they scored twice in the opening chukka.

However, with the Aston Martin team carrying a two goal handicap, the Knight Frank Exeter team of John Fisher, Mark Williams and Geoff Persey managed to fight their way back into the game as the players got accustomed to the unfamiliar playing surface.

As the tide advanced, driven higher than predicted up the beach by the strong winds earlier in the day, spectators were able to get even closer to the action as the width of the playing area was reduced by the advancing sea.

This resulted in a very tightly-fought conclusion to the match, as players jostled for position in the shoreline. The Aston Martin team had the chance to seal a win with a penalty hit, but the goal was narrowly missed and as the hooter sounded for the end of the fourth and final chukka, the scores were tied at 2-2.

“Veuve Clicquot Polo on the Beach was all about bringing polo to people rather than people to polo, and I think we managed to do just that at Watergate Bay,” said Paul Youngs. “A large number of the spectators on the beach had never seen polo before, and I can’t think of a better introduction to this wonderful sport than to watch a match on a beach on a summer evening with a glass of champagne in your hand.”

Following the trophy presentation, attention shifted to arguably the most important part of the event: the post polo party in the Ocean Room at the Hotel. Live music was provided by the band Small Wonders and players and spectators all enjoyed champagne cocktails and a barbecue buffet on the pool terrace.