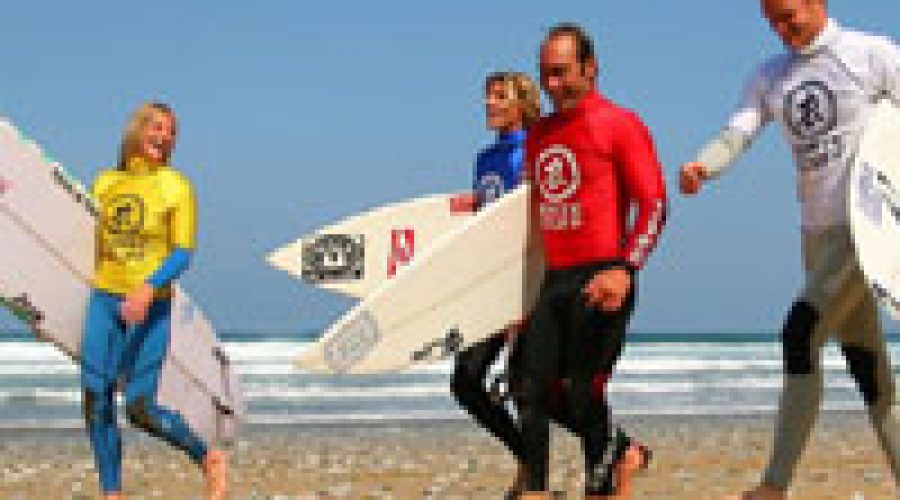 The White Stuff Surf Relief Day 2007 is a totally free beach festival and is supported by The Hotel and Extreme Academy, Watergate Bay. A whole day and night bursting full of fun events for people of all ages is planned and a host of beach activities will be on tap. Set against the backdrop of the annual surf contest will be a Premier Sixes Beach Football tournament, a sand castle building contest, ultimate frisbee, circus workshops, face painting, a rock pool roadshow with the Blue Reef Aquarium, a design your own White Stuff T-shirt competition and a beach BBQ. Starting the event with a blast will be five divers from the Cornwall Parachute Club who will be literally dropping on to the beach to get it all going.

Many UK pro surfers are also supporting the cause by competing to win the SRUK Cup, all proceeds from their entry fees will go to the charity. Some of the surfers confirmed already include last year’s winner Llewellyn Whittaker, Newquay’s Alan Stokes, British team rider Johnny Fryer and Womens Longboard English Champion Sophie Skinner. Spectators can expect to experience a day of extreme competition and to see some inspiring manoeuvres. Categories include the White Stuff Surf Relief Open, the Surf Relief Day Women’s Competition, the Surf Relief Day Grommet Competition as well as a Fancy Dress Surf Comp (open to all) and a Fun Board/Swell Board competition.

A range of enthusiastic local companies have generously stepped in to support the event and a host of sponsors for the surf teams have been announced. These include Adventure Cornwall, Gone Feral, Extreme Academy Watergate Bay, Reef Surf Lodge & Surf School, Mojito, Rushbox, Christian Surfers, Seabase, Evo Management, Skinners and The Print Environment. The final teams and heats will be drawn on Friday by Dave Reed of UK Surf Promotions.

The UK's first ever surf school for the disabled will also be at the event providing unique surf coaching sessions for a number of disabled young people. Freedom Surf, one of SRUK’s partner organisations, is a volunteer-run organisation based in Newquay, which was first piloted last summer by Cornish surf instructor Mark Hill and the White Stuff Surf Relief Day will mark the official national launch for the school. Mark has spent the last year developing the project, and has now perfected a unique two-man surf board which will be demonstrated in public for the first time and give some their first ever experience of riding a wave.

Mark says, "The boards have been specially designed to enable me to surf with someone else riding on the front. It means that even people with severe disabilities can experience the best sport in the world. For me, the joy of it is being able to take them out and give them that feeling of being on a wave that only surfing can give you is unsurpassed and I'm delighted to be able to officially launch Freedom Surf at such a prestigious event as the White Stuff Surf Relief Day. I'm really looking forward to the day, and hope to be able to work closely with Surf Relief UK in the future."

At the end of the day the pro surfers, Surf Relief organisers, sponsors, volunteers and all spectators are invited to chill on the beach and enjoy the Sunset Sessions. Newquay-based company Barefeet Promotions is busy making the final plans for the running of the sessions which will see an impressive line-up with an eclectic range of sounds and styles. Just back from supporting the Fratellis on their tour Jackson Analogue will headline with Barnaby Ray Quartet, Two Spot Gobi, Tarka Groove and Johnny Pioneer also performing on the specially created stage on Watergate Bay.