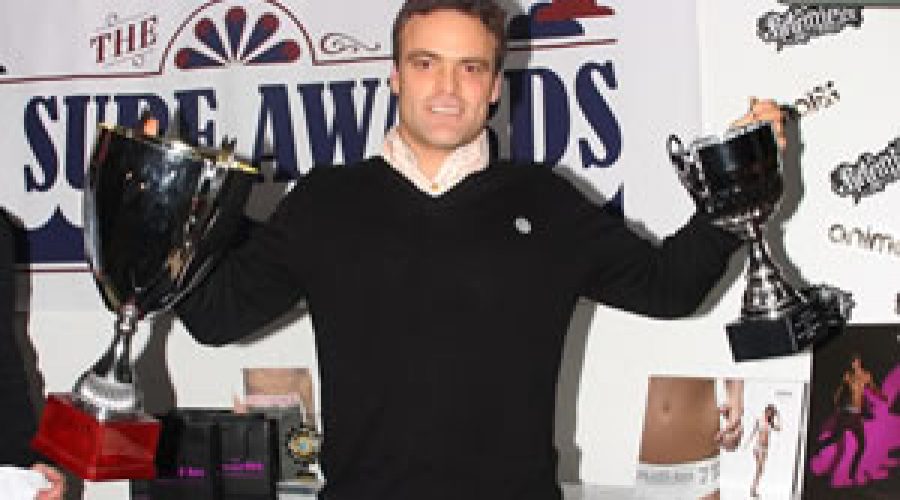 Despite being eliminated early in the final contest, Winter had amassed enough points over the course of the tour to defeat his closest rival Gordon Fontaine from France by a handful of points.

Winter won three tour events in 2010: the Saltrock Open (Croyde), Fraserburgh Open (Scotland) and North East Open (Tynemouth) putting him in a nearly unassailable position. The rest of the pack had to be at their best to compete with his challenge.

But Winter’s early exit from the Animal Newquay Open, meant he could have been caught by the Frenchman if he had advanced to the final. Fontaine folded in the quarter finals, in the event which was eventually won by Reubin Pearce.

Commenting at the UK Surf Awards Russell gave respect to his fellow competitors and acknowledged how far UK surfing has come over these last few years, especially from the junior ranks. He also looked forward to next year where he intends to persue the tour and continue with his coaching career helping to further develop the surfing Groms.

Gwen Spurlock from Swansea won the Women’s division for the second year in a row. She also went out early in the Animal Open making it an extremely tense final. Nicole Morgan (Ireland) had to place either first or second to take the title from Gwen but unfortunately for her she could only manage a fourth place.

Another remarkable year was had by Luke Dillon who dominated the Under 16 Boys division winning or making the final of all the events through the year to take the title.

Tassy Swallow showed how much she has improved in taking the Under 16 Girls title. She also won the Women’s Open division at the Animal event defeating all the senior girls

For the second year running Harry DeRoth (St Ives) took the Under 12 Open title. He also picked up a trophy at the UK Surf Awards the Wavelength Most Promising Junior.

The UK PST would like to thank 2010 Tour sponsors for all their support and assistance throughout the year, also thanks go to all the staff and competitors who have all come together to make 2010 a very successful year.

The tour will now be on a break until early next year when the first event will be the Saltburn Open on the North East Coast.