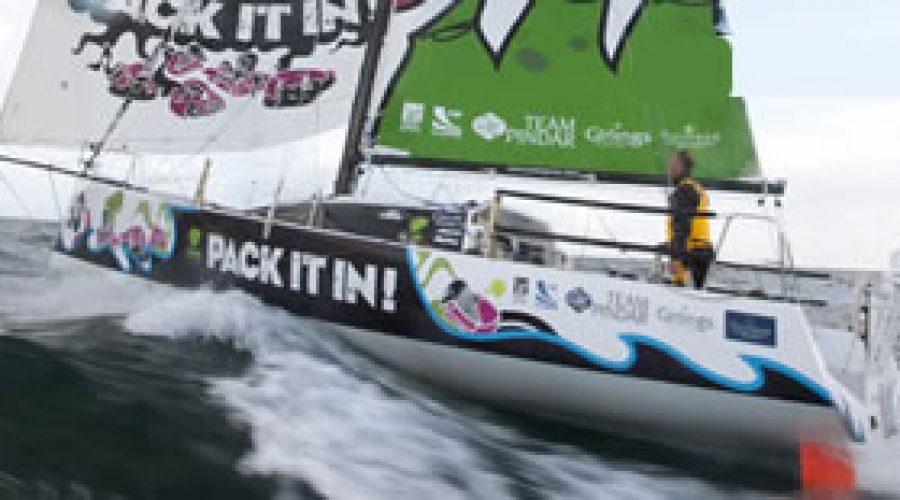 After an absence from single-handed competitive sailing for 14 years Pete said that he was delighted with the result.

“It was always our aim to finish in the top third and as the first Brit home, which we achieved,” said the 48-year-old sailor who is based in Torpoint.

Title sponsor Dave Summers of Disc Manufacturing Services said he was delighted to work with Pete who saw at first hand the floating detritus that he and DMS are campaigning to eradicate with their message to ‘Pack it In!’ They hope that the striking message painted on the side of the boat and the unique and colourful urban artwork will have made people think and encourage them to consider reducing plastic packaging, much of which is sadly ending up in the sea.

Speaking of the winner, Pete said: “I would like to congratulate Thomas Ruyant on Destination Dunkerque for winning the Class 40 division; an outstanding job by a young up and coming sailor who will be one to watch.”

He added: “I have had an absolute ball in this race and loved every second of it; I had forgotten how much I enjoy solo ocean sailing.

“This whole adventure came out of the blue. Six months ago the good ship DMS was a dusty new hull in a shed, but the whole team have pulled together like one big family and mounted a successful campaign.

“So what is next? I honestly don’t know, but for now I am going to have a cup of tea and spend some time with the family before deciding.”

Want to learn to sail? See our section on sailing in Cornwall.