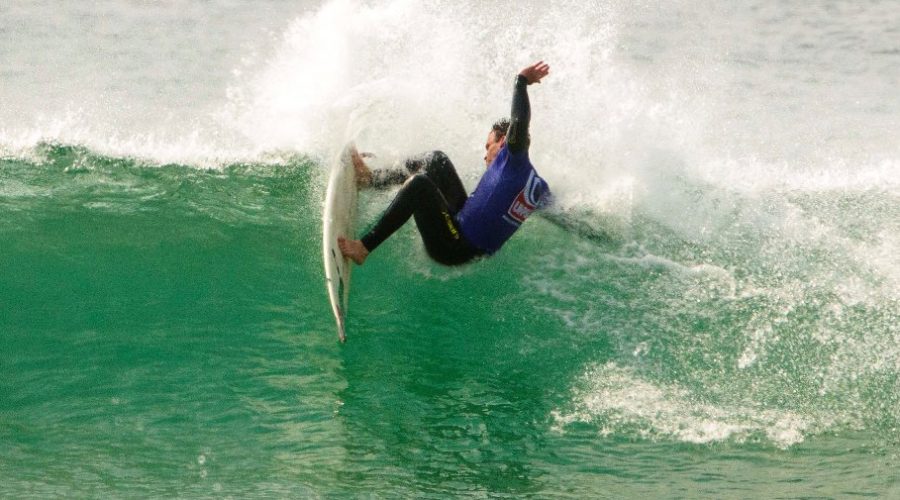 The 41st English Nationals Surf Championship in association with P20, hosted by Extreme Academy, was a huge success over the bank holiday weekend, thanks to the hard work of the Surf Science and Technology Foundation Degree students at Cornwall College Newquay, who helped organise the event in conjunction with UK Pro Surf Tour and the English Surfing Federation.

Surfers descended on Watergate Bay for the three day weekend to take part in the one of the first surfing competition on the 2013 calendar. The conditions were perfect and the beach was packed with spectators hoping to witness fantastic surfing. Having both great weather and waves for the finals was an added bonus for all the top surfers in the country who entered the event.

Winning the Sundried Open National title was Russell Winter twice UK Pro Surf Tour champion and possibly one of the best ever surfers to come out of Europe. This is the first time for quite a while Russell has competed in the event and made an emotional tribute to his family and his late friend Randall Davies. He also took home £1,000 prize money and 1000 points on the UKPST. Second place went to Gordon Fontaine from Bournemouth, third to an inform Newquay surfer Mark Harris and fourth to Louis Eyre

In the other divisions there were many standout performances; Keshia Eyre (Louis younger sister) won the Disco Beads Women’s division in decisive fashion. In the Zumbatastic Men’s Longboard a World class Performance was put in by Ben Skinner as he dominated over his fellow competitors in the final. The Zumbatastic Women’s final was taken out by Charlotte Bayliss

The Senior and Veteran divisions were won by two Newquay Lifeguards, James Mitchell and Mark Oliver. Masters by South Devon based Martin Connelly. In the Cornwall College Juniors, U18 Boys Champ became Bude’s Isaac Marshall fresh from winning the U16 Boys British Schools title two weeks ago. The U18 Girls trophy went to Croydes Peony Knight consolidating her position at the top of the UKPST rankings. The Treviglas Surf Academy U16 Boys and Girls went to, Joe Harding from Kingsbridge who also won the U14 Boys and Croydes’s Flora Lawton. The U14 Girls went to up and coming Newquay Girl Micha Maguire and the U12 Open title went to possibly one of the future stars of British surfing, Bude’s, Stanley Norman, who was also awarded the Dave Gent trophy for best English Junior.

This year’s Randall Davies Trophy went to the event Head Judge Mike Durkin for all the work he has put in over the last year. Mike was one of Randall’s best friends and has always lived and loved surfing.

Brender Willmott, Programme Manager for the Surf Science and Technology Foundation Degree said: “This year the students have managed to organise one of the most successful English National events and we are so proud of them. They worked really hard and were a dedicated and committed team. They arranged everything for the event from the marketing, judging and managing both human and operational resources, to raising the sponsorship from P20 Once a Day suncream, Disco Beads, Sundried, Zumba-Tastic Newquay, Surf Academy Treviglas and the Extreme Academy.”

The English Nationals Surf Championship is one of Europe’s longest running surfing competition, where some of the best surfers in the country compete for the title of English Champion and selection to the English team for the European Championships to be held in the Azores later in the year.

Student Charlotte Anderson-Jones explains what it was like to organise such an important event, ” The Surf Science and Technology Foundation Degree focuses on a wide range of modules, ensuring that on completion of their studies all students have gained a broad knowledge of the whole surfing industry. During their studies the students spend time learning about surfing culture and history, marketing, business, law, management, marine conservation, design and production, psychology, health and fitness relating to sport, environmental dynamics, surf practice and coaching, and of course, event management.”

Rachel Menashy, from sponsors P20 Once a Day suncream said: “On behalf of Cubo, P20 and the staff who were down there over the weekend, I just want to say thanks to the students for making it an enjoyable, exciting weekend and for welcoming P20 to the English National Surfing Championships team. We’re really pleased with the amount of exposure we got and really appreciated the mentions throughout the event, during announcements, presentations, on Facebook, Twitter and Instagram, not to mention our involvement in the award ceremony! It was a great partnership and we’d love to work with Cornwall College again in the future.”

Andrew Smart, head of Cornwall College Newquay, said: “The students have done a fantastic job of organising this event and we are all really proud of them. Employers are constantly looking for employees who are ready to hit the ground running and can show that they are capable of more than just theoretical work and the students have certainly shown that this weekend. There really is nowhere else that the students will be able to gain this much experience firsthand, before they start work in the industry.”