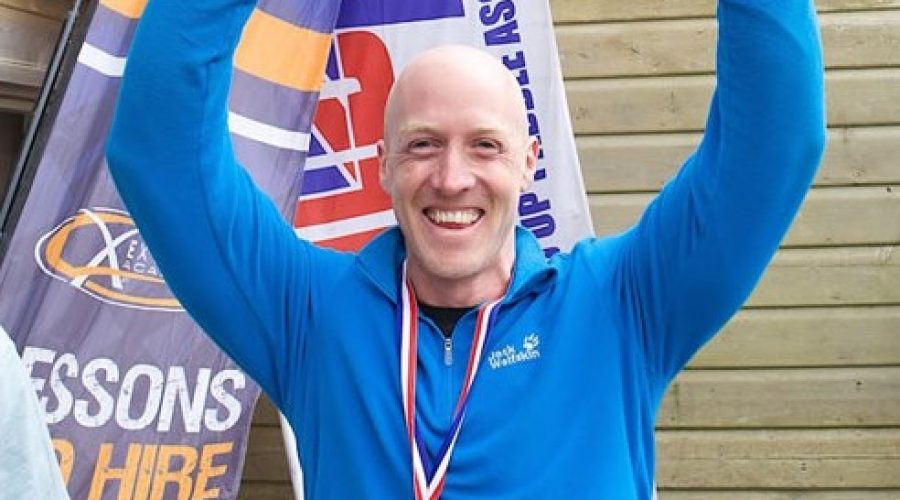 Interview with Legends of the Bay Champ

We got together with Dom Moore, this year’s winner of Legends of the Bay which saw the two water disciplines of stand-up paddle boarding and kitesurfing go head to head.  Dom competed against forty other experienced watermen and watergirls to become the overall winner.  In the afterglow of his win, he has found time to chat to Adventure Cornwall about his winning weekend at Watergate Bay along with some handy competition tips and why his dog, Reb is instrumental in his preparation.

How did it feel to win the Legends of the Bay? Do you feel like a legend?
Haha, not sure I feel like a legend quite yet, I think you have to be over 40 for that one?  But it feels great; I really like the idea behind the Legend of the Bay event, and to win the first one is a real treat. The whole weekend was a superb experience, actually quite tiring so that first beer upon winning went down really nicely.

Did your famous dog, Reb, help you at all with the preparation? What was your preparation?
Oh yes, in her own way! She was hounding me before every heat, nipping at me as I was hustling to get in the water when I was late for my first SUP heat, but also running up to meet me every time I rode a wave into the beach.

How inspirational has she been?
In fact it’s quite a morale booster to have your beloved dog running around on the beach; Watergate feels a lot like home anyway but having Reb around might have given me even more of a psychological boost. Feel good vibes for sure, which is important for getting in the zone.

At what point in the competition did you realise, ‘I could nail this?’
I think it was as the semi finals were unravelling in the SUP comp on day two. I’d placed in the finals of the kitesurfing on day one, but came 3rd, and at that point was hopeful of a top 3 overall. But so much of competition is how well your fellow competitors fare, and when Lee Harvey crashed out in the second round of the SUP that strengthened my chances considerably.

Was there a tough point during the competition?
I had a shocker in the kite final, picking up only one wave due to foolishly selecting too small a kite. Oh, and arriving late for my first SUP heat – the guys were already on the water as I was sprinting down the slipway with my board, the missus carrying my paddle and leash! The lack of time to even get butterflies for that heat probably helped as I won it, putting me through to the SUP semis.

It’s a big trophy, do you have a mantelpiece big enough?
Just about! It’s perched on there right now.

In the Dog House (radio edit) from Kristian Butler Film&Sound Art on Vimeo.

Did the victory feel sweeter being on home turf?
Yes I think it did. Everyone expects the local guys to have some sort of home advantage and so long as the trophy stayed in Cornwall I would have been happy! Along with my friends like Smiler, Bennet and Millson (not so much these days) I spend quite a bit of time at the Bay, I used to work there, still run courses there, have a lot of friends there, and I really love the place so to bag the trophy is a source of glee.

What was the standard of your fellow competitors?
Very good. Every year the standard in the kiting gets better and better with more people coming up through the ranks. All over the UK kiters are riding really hard. The SUP guys are supremely talented; I don’t spend that much time on a SUP compared to the kite so it was good to see what can really be done with those things in the marginal conditions we had on day two.

Any tips for other would-be legends out there?
Enjoy your sports and don’t worry about trying to keep up with trends you see on the internet. Find out what you’re good at and then focus on that and try to excel in your niche. I’ve never been a small wave trickster but discovered some time ago that kitesurfing in big waves is a lot of fun. That’s what I focus most of my attention on in kitesurfing and I think when you get good at one thing, it increases your performance in other areas.

Keeping an open mind to different types of equipment and different ways of riding boards whether you are powered by wind, paddle, or your own bare hands will increase your good days on the water considerably and reduce the down time waiting for waves. Being able to have fun regardless of what rolls in is the best way to be, don’t you think?

Any more competitions on the horizon?
Gonna go for the BKSA Wavemasters in Tiree this September, but otherwise I’ll be completing filming for the Volvo Cold Water Project and then embarking on a couple of new style missions of my own…

We’ll have to watch this space for the future.  Here’s wishing Dom lots more luck in the coming year.