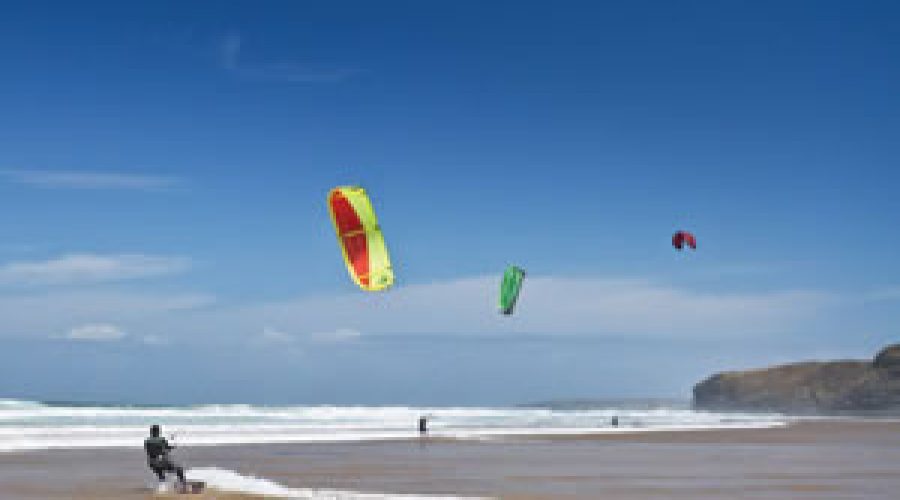 A world-beating kitesurfer is set to compete at Watergate Bay in the opening round of the national kitesurf course racing championships. Exmouth’s Steph Bridge has won the world championships for three of the last four years, and is widely recognised as one of the world’s best performance athletes in the sport.
She will be joined on the weekend of the 9-10 April by many of the UK’s leading riders at the British Kite Surfing Association (BKSA) event, which sees kitesurfers compete in a series of races around a course marked by buoys.
Will Ashworth, Managing Director of hosts The Hotel & Extreme Academy, Watergate Bay, said: “With up to 30 competitors taking part in each heat, course racing is one of the most exciting variants of kitesurfing to watch. Similar to dinghy sailing races, the start is crucial with riders fighting for the best positions when the hooter sounds.
“The power that these kites can generate is quite incredible, and while course racing is all about speed, it is fascinating to watch the different tactics the riders use to navigate their way around the course.”
The Watergate Bay event is the first of five rounds which will decide the BKSA’s national course racing champions. With professional riders of both genders competing in the Open races, Steph Bridge will be facing tough competition from the likes of Penzance’s Lee Harvey, and Cornishman Denzil Williams who came second at the Watergate Bay event last year.
Also looking to perform well is 2010 British champion Callum Edge, from Weymouth in Dorset, who clinched the title with a series of strong performances in the tail end of the 2010 season. An experienced windsurfer, Edge only started kitesurfing in 2009, focussing on the course racing discipline.
He said: “The first race of the year is always really interesting to see how everyone has been training through winter. I’m hoping I will be able to carry through my form from the end of last year when I was a lot quicker than everyone else.”